A while ago I was lucky enough to obtain some Short-eared Owl pellets from Paul Riddle, with the intention of poking about like I did with Barn Owl pellets last year. I did go through them, and promptly forgot to post anything about it. I only remembered to summarise the results following a bit of e-mail with Paul yesterday about the Whetstone Little Owls. So - what did I expect and what did I find?

First of all it's worth noting that the pellets were actually smaller than I expected - in fact most were smaller than the Barn Owl pellets from last year. The general shape and consistency was pretty similar though, as would be expected given that they made up of are virtually the same small rodent remains. The only other expectation was that the results would show a predominance of Field Vole in the diet.

I dissected ten pellets in total, with the remains of 25 small rodents found and no birds or amphibians. Six pellets had two rodents, three had three, and one had four. As expected Field Vole was the commonest prey with 22 found, and just two Common Shrews and one Wood Mouse. Here's a pseudo-scientific SEO Pie Chart. 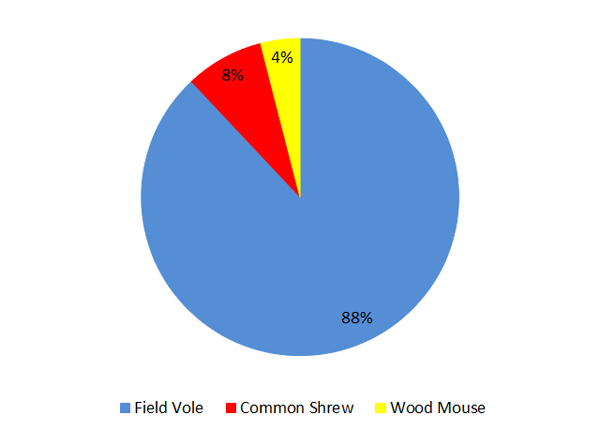 I didn't bother photographing anything as there was nothing different to the shots from last year.

Today I mainly moped about feeling sorry for myself, coughing and sneezing at irregular intervals.
Posted by Skev at 20:28


SEO Cannock nock Chase Our detailed report Tracks every single targeted keyword or keyword phrase on multiple search engines in any country or multiple countries, with the ability to compare your positions with that of your competitors,

allowing us to adjust your campaign according to ensure your online market dominance. Reports are sent monthly to