Had a great family day out yesterday at Alton Towers, though I have to say that when it comes to thrill rides, rollercoasters and anything that churns your insides inside out, I am a complete pussy. There is no way on earth I would go on the Oblivion for example, as quite frankly I'd have a cardiac arrest half way down the vertical plummet. So, my arbitrary line in the sand is this - if the height restriction means that my 8 year old Alex can ride on it, then it can't be too bad and I'll go on it aswell.

So, the first thing we went on was the THI3TEEN rollercoaster, of which none of us knew anything but Alex was tall enough to go on. 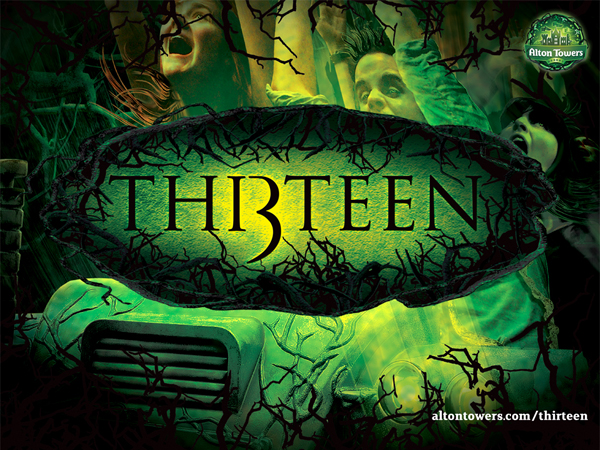 I've never been so scared and thrilled on a ride before. The worst bit about rollercoasters for me is the initial climb giving you all the time in the world to anticipate the stomach churning drop. That was bad enough, but once the ride came to a stop then the real thrill started with a load bang and then the whole thing dropped slightly - causing screams from everyone on board - then it really dropped. Shit the bed! How the hell did that happen, and - WTF - we're going very fast backwards.

Only after the ride did I read the bit saying it was the world's first vertical drop rollercoaster. Looking on the web the drop is 5M, and the combined thrill and fear factor has given rise to a new descriptor for this type of ride - a Psychoaster!

Alex loved it. We went on again towards the end of the day, though Alex wouldn't sit next to me in case I screamed like a little girl and cried. Even knowing what was coming it was still a surprise! Great ride, great day.
Posted by Skev at 21:29

You can count me in the pussy category too, just forget it.....even the merry-go-rounds!

Probably the worst day out I've ever had !

I thought Alton Towers was a total shithole...... The fact that, I hate people, I hate dole dossing shellsuit clad chavs, I hate queuing for anything, I hate fast food, and I hate screaming brats, probably didn't help the situation.... I have low tolerance levels of most things in fact !!

Anyway I only went because the missus was desperate to go..... Went on a few rollercoasters with her and they were alright I suppose, then she got me on to this thing called RITA or SHEILA or something. It was supposed to be fast but I am into riding superbikes at the weekends, so I thought it would be a doddle, time to show her how manly I really was eh....

HOW WRONG COULD I BE !! This thing took off at a million miles an hour and scared the shit out of me !! It was all over in about 30 seconds or something, but it was the most horrible 30 seconds of my life, I spent most of it with my eyes shut swearing and praying for it to be over !!

My attempt to look manly crumbled as I stumbled off the ride, unable to speak with a “what the fuck just happened?” look on my face....... she just looked at me, and laughed !

How do people enjoy that ? How is it even legal ?... Fuckin thing nearly gave me a heart attack !!
NEVER EVER AGAIN !!

After that she tried to get me on that oblivion thing that drops vertically out of the sky.....My response....

I can empathise with some of your opening paragraph - I tolerate it as a sort of self-flagellation for producing screaming brats in the first place (though no shell suits here).

Nichola and Isabelle went on Rita - 0 - 100kph in 2.5secs apparently, about the same as a Ducati 1198SP? Looked feckin fast either way.

Dont worry Mark, Gary is soft as ;). I liked it when I visited Alton Towers in the dark ages...

I think they still have the corkscrew and log flume you know !!