The art of out-of-garden mothing

In anticipation of getting out and about, I'd ordered some replacement 40W actinic tubes from Watkins and Doncaster to repair my actinic/tungsten trap. I ordered them on Wednesday night and they arrived on Saturday morning (remember Friday was a holiday for some reason or other) - superb service. So on Saturday I set about refurbishing all of my traps including the big uns. Here are the various lights I use .. 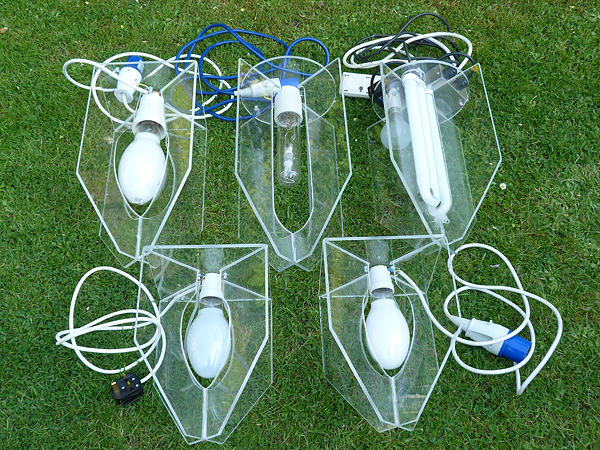 Clockwise from top left: 250W MV (lighthouse), 250W Metal Halide (eye cancer light), 80W actinic / 100W tungsten combo (newly repaired), 125W MV (x4 traps), 160W blended (choke-less alternative)
Having sorted the traps, the weather on Saturday was warm sunshine, almost cloudless, bone dry, blistering north-easterly. The weather yesterday (and today for that matter) is like a stuck record. In mothing terms, the weather is pants. However I have long held a theory that irrespective of the conditions, if you go to where the moths are you will catch something. With this in mind, I managed to tempt Adrian out on a foolhardy excursion to the best bit of woodland in VC55 - Pickworth Great Wood. This is a long way to go (right in the north-east of the county on the border with Lincs.) and if you are going that far you may aswell load up with as much as you can and make a real go of it by staying overnight. Some would suggest that doing this on a night when the conditions are pants is plain daft. They may be right. 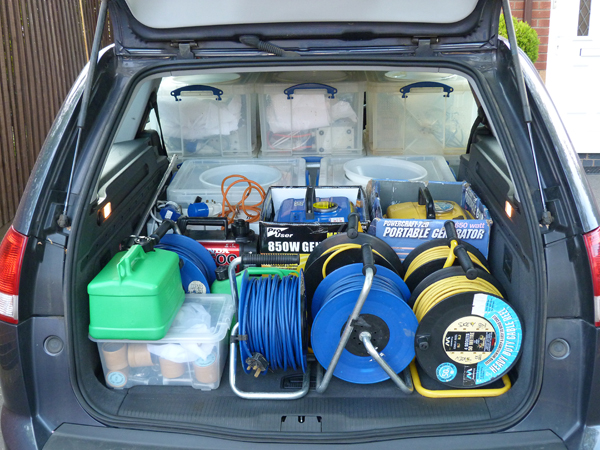 A half-loaded Vectra estate - 8 traps, 3 gennies, 6 cable reels, 2 petrol cannisters, 2 x 250W choke assys, box of pots, net handle, loads of wasted space that could have been filled with more traps and cable if I had any and a tripod light/gear if Adrian wasn't taking his. The footwells and passenger seat are utilised for essentials like cameras and i-Pod, and non-essentials, like clothes, bedding, food and drink. All that remains to go into the back is a pasting table - you'll see later. Adrian's Discovery was simlarly loaded.
Having arrived at the trapping site, and before deploying kit, ensure you have selected a suitable base for the night and for collating and emptying the traps in the morning. Get on with the task in hand (put the lights on) and then get your bed sorted. Happily, the now empty Vectra is long enough to sleep in and a damned site warmer than a tent at this time of year. 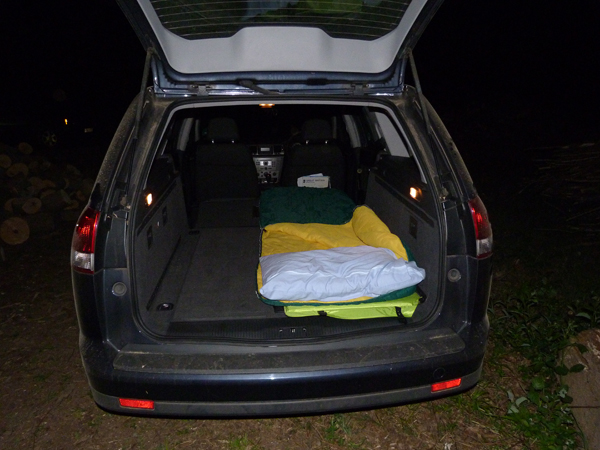 Sit around a tripod light having a natter and potting the odd moth, and occasionally patrol the traps before topping up the gennies and getting some shut-eye. Set your alarm for dawn. ish. Now the hardest work of the whole venture. Gathering up the traps to a central point, reeling in the cables and bring back the gennies. If you've chosen the site well with decent tracks and rides, you will make this easier by packing up your bedding and using the again-empty car to transport everything back. 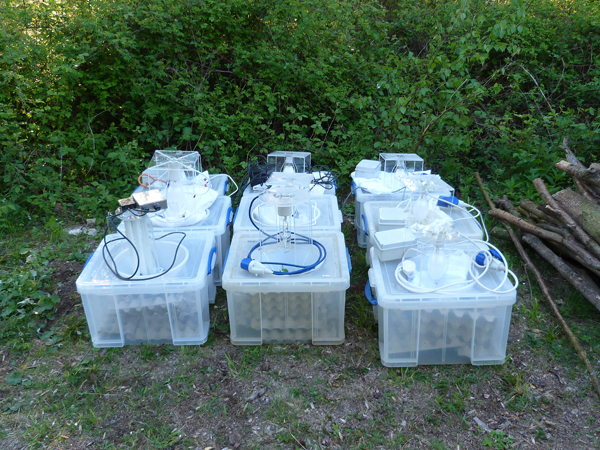 Gather the traps to a cool shady spot pending emptying. This is 9 of the 12 traps we ran in total last night.
After the hard work comes the prize - leisurely emptying lots of traps in the early morning light with nothing going on except the dawn chorus. Tawny Owls still calling this morning, Cuckoo singing in a cleared bit of the wood, Great Spotteds drumming and calling constantly, plus an array of common warblers, thrushes and tits. 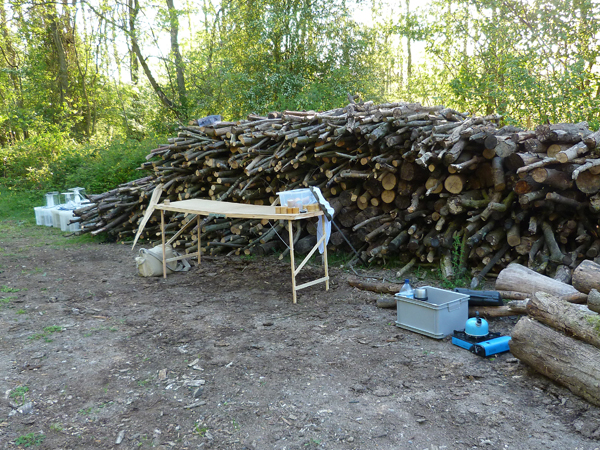 This is what the pasting table is for - a very convenient trap emptying station with room for pots and cups of coffee.
Cups of coffee? Where do you get that in the middle of woodland. And what about some breakfast .... 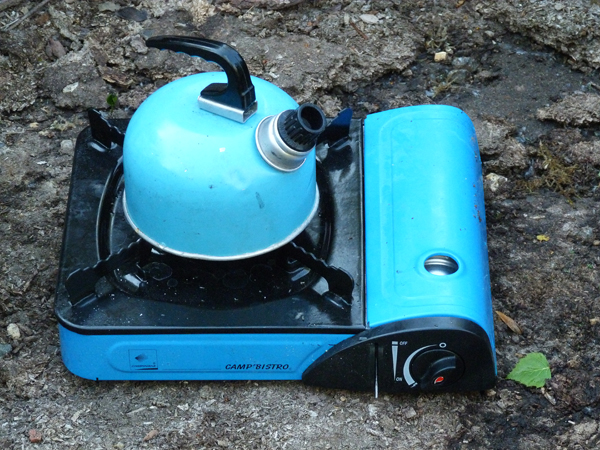 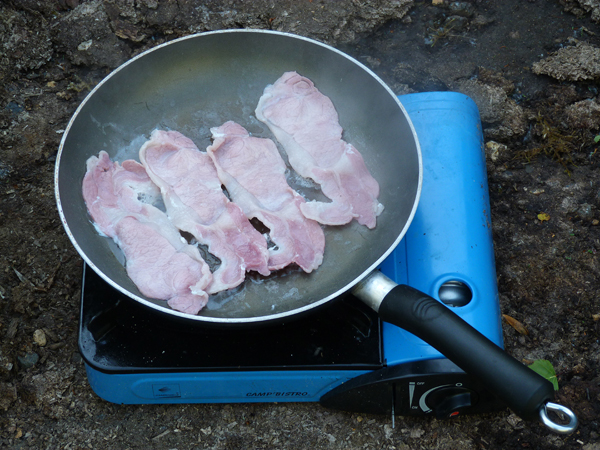 After plenty of coffee (or tea as I had this morning), and some smashing bacon baps, the trap-emptying sadly comes to an end. No more anticipation of what could be lurking on the next egg box. Mind you, also no more chances of inadvertently putting your fingers on one of these .... 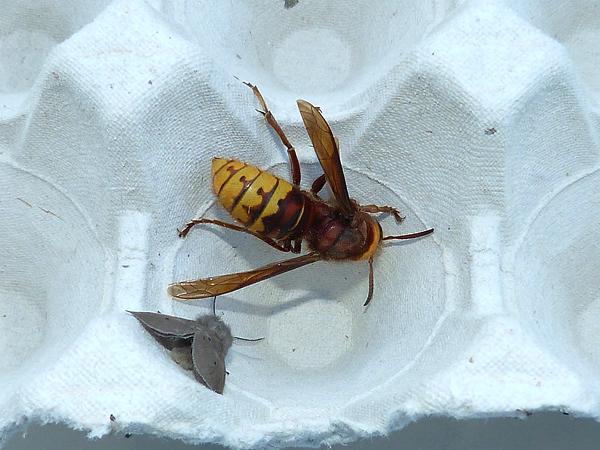 Massive queen Hornet with a Muslin Moth in the same cavity for comparison.
Now comes another chance to utilise your surroundings to best effect. If you are in woodland, there should be plenty of photographic props around. If you have used the Forestry woodyard as your base the opportunities are increased. 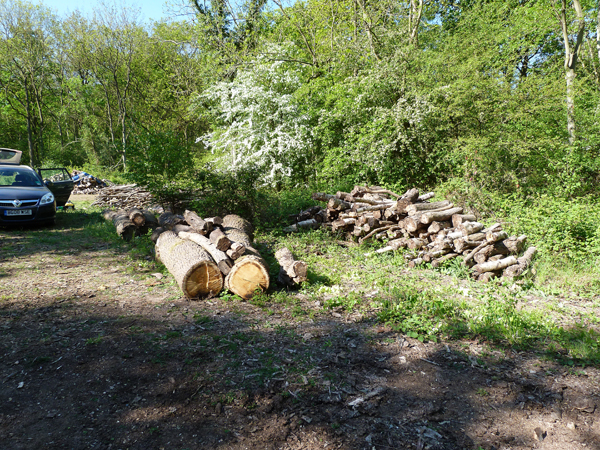 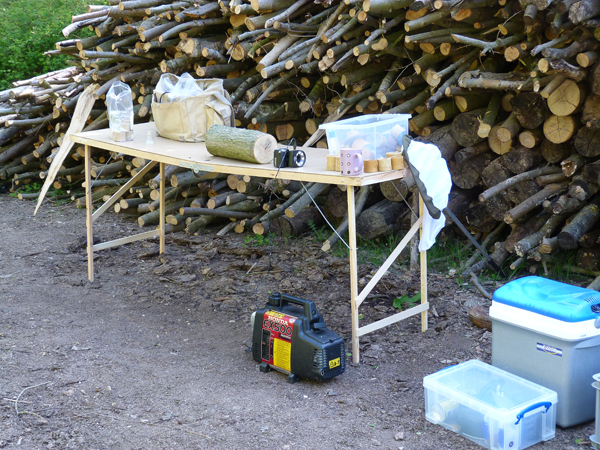 Make use of that table again. Might aswell fire up a gennie to power the macro light for the camera whilst I'm at it. 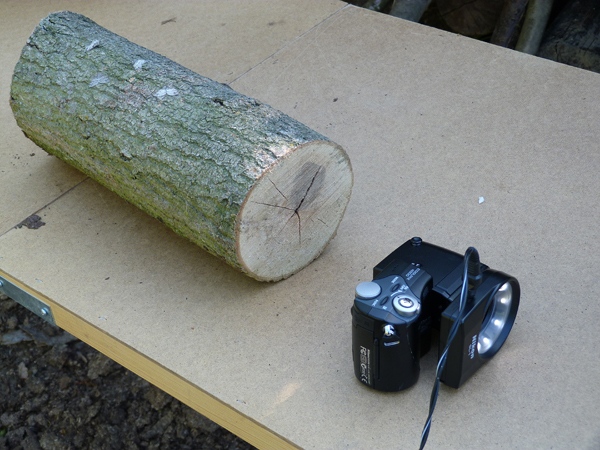 Prop in use
As for the catch - well, I'll summarise that later but suffice to say the theory held out. Just about. Definitely a night of quality over quantity, with some great moths (in a VC55 context) but few individuals vs the effort.

Here's a couple of flowers from the wood .. 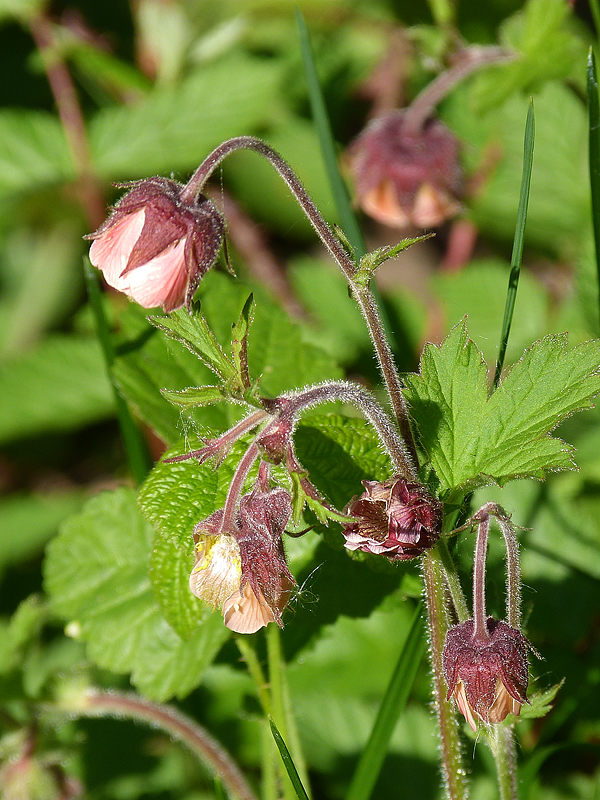 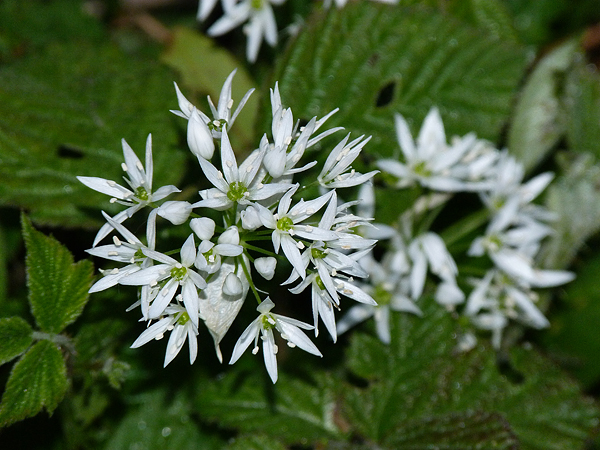 Fantastic Post Mark. I would love to have a go at that. I might get away next week, on a very much smaller level of course, depending on the weather.

What is that macro light thing, would it work on my Lumix and where do I get one and how much!

Where are the moths?

Sorry there are more than two questions there....

Thanks Stewart. I use the Nikon Macro Cool-light SL-1 on my trusty old CoolPix 4500 for moth photos. It's a bit like a ring flash except that the lights are bright white LEDs which stay on constantly. I use photographers card to set up the white balance each session though. No idea if Panasonic do anything similar for the Lumix - you can't really get as close as with the Nikon so maybe the effect would be less anyway.

If you mean the moth pics, they'll follow with the overall summary tomorrow.

Great read Mark, inspired me to try and get out again when I get the chance! That is a lot of traps, I suppose do you go with the theory that the more traps, the more moths?

We run usually 4 between the two of us, all in different directions.

I've heard a lot of people use the metal halide in over in the States (it even sounds American) is it effective at pulling in different species? I've certainly noticed my 160w MBT pull in a few 'specials' over the last year or two, i'm sure your one does the same.

Look forward to the catch results.

Thanks Ben. It's a case of more traps, more coverage and more chance of building up the diversity. We've had a number of nights with four of us running 20+ traps at places like Wicken Fen and Dungeness - that's a lot of coverage (and a long enptying session). That said I've had some brilliant nights on my own with big lists using a lot less traps.

The metal halide is a bit hit and miss and probably not as effective overall as an MV, but yes the varied light sources create more chances again. It is realy bright though and you can't look at it!

That is truly industrial! That looks suspiciously like an Ebay £68 factory refurb gen. to me...Super post, looking forward to the results. How long have you been building up your gear for?

Do you mean the small Honda Matt? That's a bona-fide original EX500 in superb working order I'll have you know. Decent ones are rare as - they go for a small fortune on e-bay. The others are plain and simple chinese 2-strokes, the blue one I bought last year and the yellow one I've had for a few years now. The traps have multiplied over the last six years or so - there is a small breeding colony in Adrian's garage.

No Mark- I meant the Blue one in the box in the back of the car- it's exactly the same as mine! It wasn't as noisy as expected either and very reliable-bargain. The Hondas are superb- quiet refined and with a useful 12v option which unfortunately makes them quite heavy. I'll go out again at the end of the month with hopefully more success.....

This is fantastic! Full on hard core mothing.

I am intrigued in the blended choke less light. Does this one work well as this is an attractive option with it being lightweight and portable.

The 160W blended bulb is definitely a viable option and well worth running as part of a suite of traps. It's usually better than a standard actinic trap, but not quite comparable to a 125W MV; given an either or option I would go for the MV every time.

Apart from performance, the main thing to be wary of is that the blended bulb gets much hotter than even the MV and is much more susceptble to cracking/blowing if caught out in rain.

As you can probably gather, it is not often that I'm out and about without a range of light options to boost the catches.

Thanks. So if it was down to a choice of Actinic or Blended Choke Less it sounds like you would opt for the latter?

I think you have a good strategy of covering all the bases in terms of lights used during a moth trapping session. Some will perform better than others in various conditions.