I awoke this morning to the hooting of a Tawny, the croaking of a Raven and the bubbling of a Curlew. This would normally have me jumping out of bed to enjoy three good garden ticks, but instead it reminded me instantly that I was away from home and in another county. We drove down to North Devon yesterday to catch up with family. As we headed south, the skies got greyer and the in-car thermometer crept up. By the time we'd arrived and unloaded, heavy rain set in ensuring that any lingering snow and ice was much pretty gone this morning.

I decided to head out to the estuary for an hour or so. I walked along my usual route along the cycle path to Isley Marsh and then back past Yelland Quay toward Instow. I usually manage to competely mis-time my visits to when the tide is far out, but today it was high and still rising.

Immediately evident in the usual spot were Spoonbills - 7 of them today. Two were sporting coloured rings but the distance and poor light made deciphering them a bit hit and miss. One appeared to have a yellow band with 'FJ9' or 'EJ9'. The other appeared to have blue over yellow flag over blue on the left leg and blue over pink over white on the right. I've since learned from the Devon News blog that these are actually white FJ9 on the former (ringed in Spain in April 2007), and green-yellow flag-green + blue-metal-lime on the latter (ringed in Holland in June 2007). 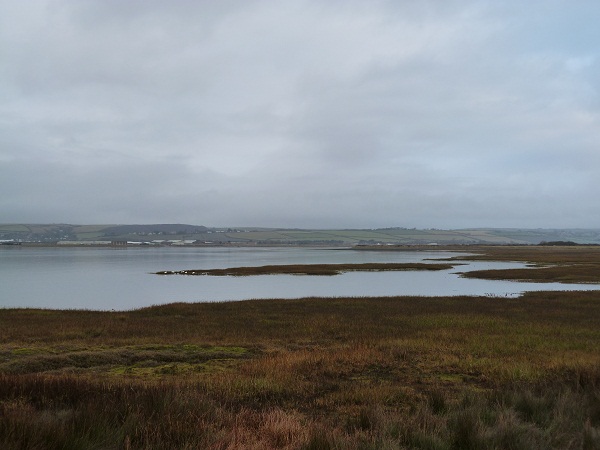 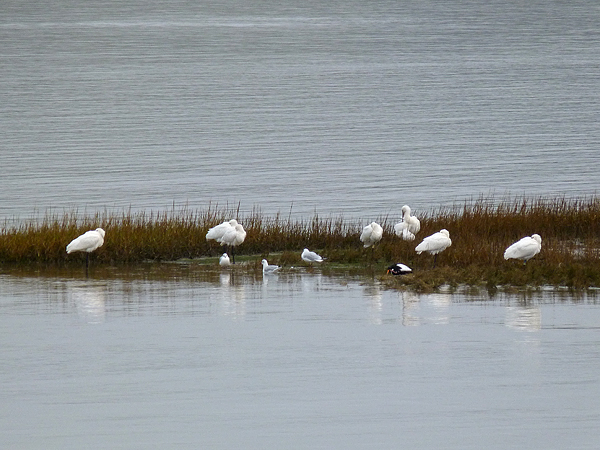 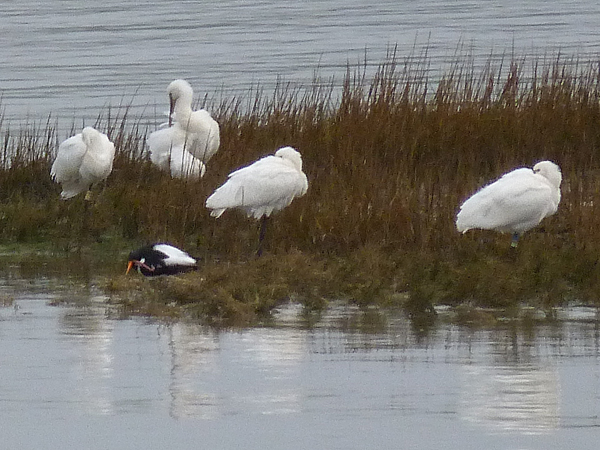 Can you see the colour bands?
Apart from the expected beaky/leggy birds, the tide line was adourned by various groups of roosting and feeding waders.

Also 27 Bar-tailed Godwits in one group, and 25 Brents over. Good numbers of Linnets, Goldfinches and chaffinches feeding in the scrubby areas, and a single Rock Pipit which my conscience refused to string into a Water Pipit. 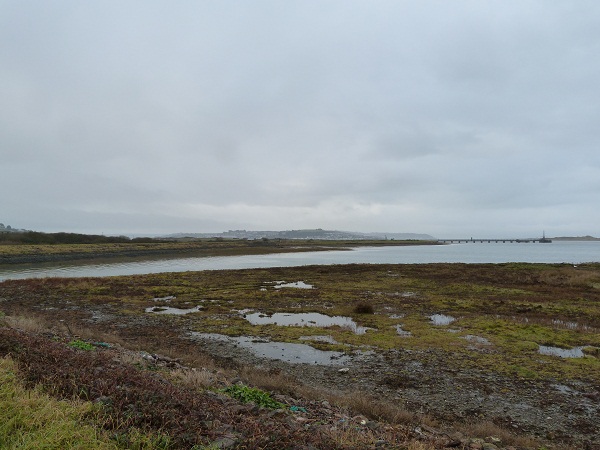 Main area where waders bunched up 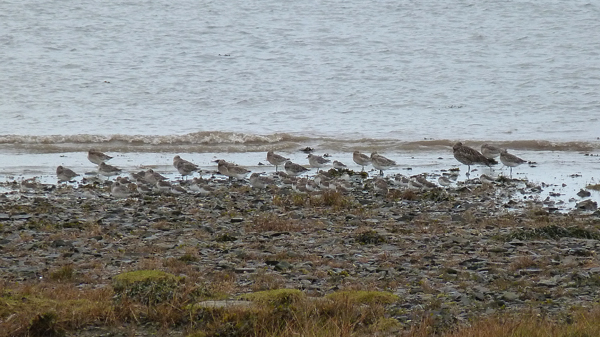 Later in the day I took the boys for a walk along the big boulders and beach alongside Northam Burrows. Here there was a large group of small birds feeding like waders in a large shallow pool in the parking area. I could see them distantly and wondered what waders they were, but a check with bins revealed just a single Sanderling amongst 29 Pied Wagtails!

Next we headed to Westward Ho! for a quick look on the rocky shore. We passed a small grassy enclosure on the way with 28 Curlews happily feeding by the roadside amongst Redwings and I cursed having left my camera back at the house. The rocks eventually gave up a single Purple Sand amongst Oystercatchers and Turnstones. Then Josh slipped into a rocky pool up to his knees and it was time to call it a day ....
Posted by Skev at 21:52