Not (yet) a patch

One thing I have never really bothered with, for various reasons but mainly through apathy, is having a birding patch and giving it any attention or keeping a patch list. I have, at various times, visited a site or area regularly (Groby Pool got a lot of visits when I first started birding before it was a gay sex venue, as did Watermead Park long before it was turned into a duck feeding shithole) but never to the point of considering them as my patch. However, I think it would be good to have one now and there is an area virtually on my doorstep that is probably under watched. The Soar Valley, as a whole, is roughly split into four continuous areas:
The area I am thinking of is bounded by the A5460/A563 to the north, the M1 to the west, the A426 to the east, and the railway line and River Soar to the south (marked with the red line). 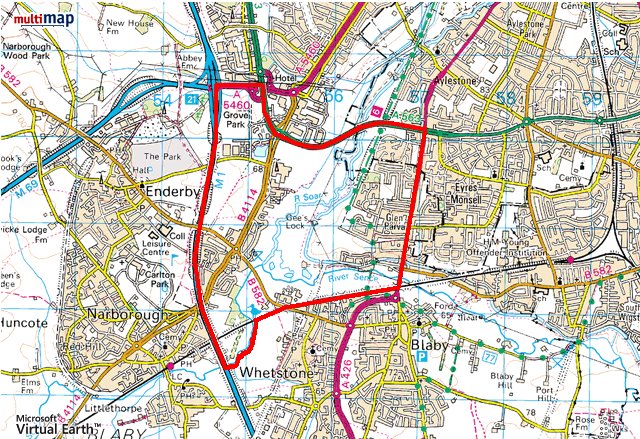 Within this boundary are the following key areas:
I suppose it would be good to know if anyone actually is covering this area regularly - tell me via the comments. Also let me know if you have seen any exciting birds within this boundary - then I will feel like I need it for my patch.
Posted by Skev at 23:06

Hi Mark, I don't think anyone sends much in. I sometimes stop in on Grove Park but there's only one good area left now. As I drive round whilst working I often see a Common Buzzard over the ring road/ Police HQ area.

Hi, Done most of this area on BTO Atlas Survery plus I check the area occasionaly, perhaps too occasionly! Keep meaning too check it more oftern. Nothing exceptional apart from Hobby over Narborough Bog, Glen Parva Gravel Pits is regulary watched by someone and does get a bit of stuff.

Is Mark still alive? Aylestone Meadows was my old teen stomping ground many years ago and I really miss it. Night Heron were the best of the bunch but always plenty of other stuff including Ring Ouzel every year and always good spring passage.....Happy days. Grove Park area used to have breeding LRP's until the Everards Brewery went up!

Mark is still about...probably still in China at mo...not sure when he's back.
Think itz a good idea to do Soar valley south.....stuff obviously filters thru...just need regular 'eyes'! I used to do Abbey Park area..only turned up 'bits'....redstart once..ditto pied fly...under st.margarets bridge! Usually the only thing you'll find under st.margarets bridge is the odd 'druggie' and frequent homo-sexuals fiddlin with they're bits...bit similar to Aylestone meadows...except you get more flashers there i believe...

Mark, I think in the past this area has had Ring Ouzel,Redstart and Long eared Owl. It wouldn't surprise me if these birds still occur in the south of the Soar Valley.
Happy Hunting!