Yesterday afternoon I went to Croft Quarry Nature Trail / Huncote Embankment to meet up with Phil Jackson, the Biodiversity and Restoration Advisor for Bardon Aggregates. The purpose was to walk the site and determine the permissible areas and boundaries for moth trapping there -I should be getting a key shortly and fully intend to get the traps out there as soon as the conditions pick up. Despite the breezy and generally crap weather, I stayed on for a short while to have a swish around with my net and promptly added four new micro species to the site list. The pick of these was Micropterix aruncella. This tiny moth (c4mm total length) is one of a small primitive group with fully developed mandibles for chewing pollen (rather than sucking nectar through a haustellum). It should be widespread and common in VC55 (no specialist foodplants), but there are very few records - in fact this is only about the sixth since I recorded the first post-VCH record in 2004. I have now recorded it from four sites, three of them being around disused quarries. 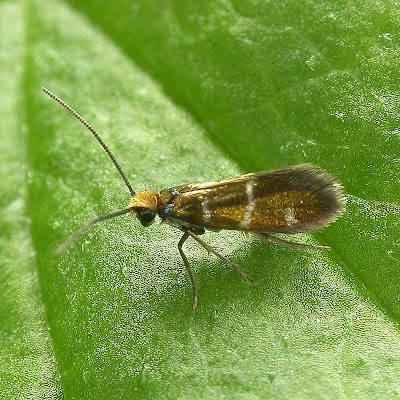 I am conducting a study of succession of reclaimed land, and I have chosen the area beind croft quarry, and the embankment.

I just came across your comments, and I am interested in what you said about the moths being found by disused quarries.

Do you have any more information, which you could possibly share, about moth populations in this area?

It would help me very much :)

Specifically about Croft Quarry / Huncote Embankment - then no I have no useful data at the moment. I have gained permission to run moth traps there but I am still awaiting a key to access the site with the necessary equipment (too much/too heavy to carry). However I am expecting that the site will hold a few interesting species.

Old quarries can be good habitats for moths and many invertebrates and other wildlife - I guess mainly because they tend to have more weedy/scrubby areas than sites specifically managed as woodland or grassland. But don't get the idea that there are moth species that specifically thrive in areas because they were quarries - all transistional sites can be good for wildlife given the chance (ie if they are not immediately turned over to sterile farmland or a new housing estate).

Once I manage to get a key and start working the site I'll be posting updates here. More than happy if you want to contact me offline for more detail:
mark dot skevington at hotmail dot co dot uk