[“Listing” is a nautical term to describe when a vessel takes on water and tilts to one side. A ship can list either to port (left) or starboard (right). Neither is desirable, as listing or rolling too much can cause a ship to capsize, or overturn in the water.]

One way or another, whilst I've been ticking along and adding bits here and there I've tilted and sunk on the PSL rankings again. It's all a bit of nonsense really - seeing new stuff is great and creating a few records along the way is the more relevant bit. But it is interesting to note that 4000 species will see you in the top 40 though that will not be the case for long. Also, within the ten listers shown here there is only a 423 species gap; what is not shown is that there is now only one lister under 3500 species in the top 50, and only one under 5000 in the top 30. In reality, I am sure there will be numerous amateur naturalists up and down the country that don't publicise their numbers who would be well into the top 40 or higher if they did.

Out of this lot, Robert Yaxley will almost certainly already be well over 4000 if/when he updates - I see him finding stuff on his Twitter account regularly. James McCulloch and Martin Bell probably are as well - I think they update at each month or so. Although I'm within 100 species of it, Ryan Clark and Sam Buckton may well reach 4000 before me too - they have time on their side. David Shute and Mark Jackson haven't updated for well over a year or more so no idea if they're seeing anything. Steve will no doubt tell me again that he's hung his PSL boots up and then add a couple of 100 species. I could be closer to the other end of this 'mini-league' if everyone updated at the same time. 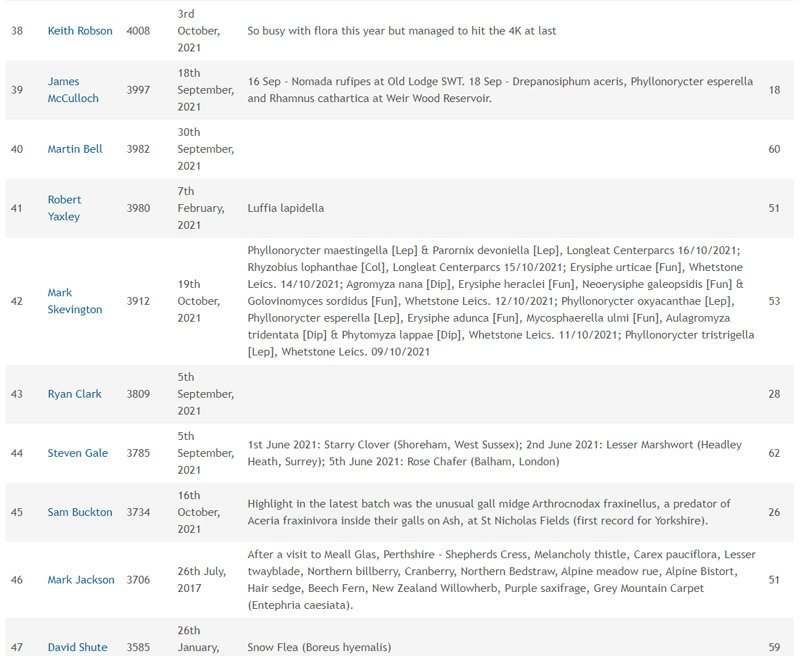 4000 will be a nice landmark when it comes but 5000 seems a very distant prospect. Ironically with health issues and lockdowns, I've added more in the last couple of years than I had for a long while: 508 species added since 6th April 2019, and at that point I'd updated after a lapse which meant I'd added just 121 species from 10th Jan 2017. Prior to that it had taken me just over five years to add 1300 species to my inaugural list.

I think I'm 'listing' as I'm top heavy, the vast majority of my list being moths and beetles. Other groups only creep up by ones and twos if I find something easy. Have tried a few flies but really struggle with the basics. Think I may just focus on the beetles and try and get proficient with those. God knows that there are enough of them.

A friend of mine will be joining the Pan-listing Group soon, astounded to find he may over 5000 and yet to update a few groups.

Same here Martin F. My list is not as 'Pan' as I would like; I did suggest on the FB group a while ago that a metric that indicated how Pan your PSL was would be nice, as ranking just on total species does not tell the whole story.