Time for another in the occasional series where I bemoan the continued absence of a species from my garden records after a long period since the last/only appearance. I'm picking out a micro for a change ... 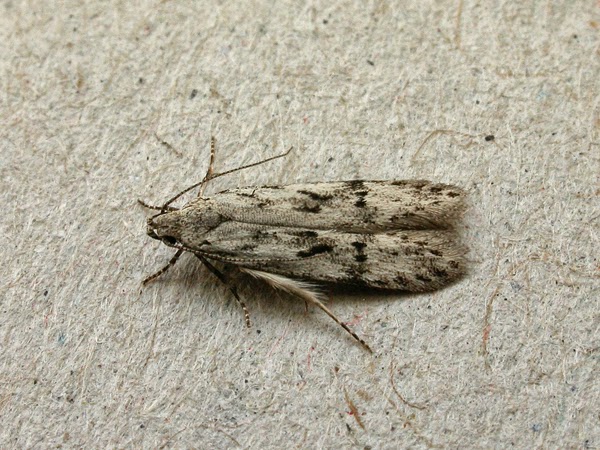 This species is pretty common around most of the UK, and the larvae feed on birch and alder - seems a very good candidate for something that you should be able to find pretty much anywhere. And yet one I jointly recorded at Pickworth Great Wood on 25th May 2001 was the first for VC55 for almost 100 years since the VCH was published. Since then it has been recorded pretty widely and regularly around the vice-county, and I've recorded it from 11 sites. But the individual above remains the only record from my garden. No idea why it's not re-appeared - there is plenty of birch around here and alder not too far away. I like the Gelechiidae and I'm 100% sure I wouldn't miss one the in the trap.

Ironically I've recorded more of the related but much more scarce Carpatolechia decorella from my garden (okay, two) a species I added to the VC55 list from Enderby Quarry on 5th July 2003 and as far as I know this has only been recorded by me from this site and my garden.

Hi Mark, just started reading your blog and notice you use a Panasonic Lumix for your moth pics. I'm in the process of buying the FZ 200 and am looking to buy a suitable Raynox lense for micros - could you tell me which you use or would recommend?

Hello Charlie, I use the Raynox DCR-250 which you can pick up quite easily on Amazon and e-bay. http://www.raynox.co.jp/english/dcr/dcr250/indexdcr250eg.htm

Okay, thanks for that Mark, my replacement camera for my old coolpix 4500 should arrive today so if I can replicate the quality of some of your fine photos I'll be more than happy.