Selby won - excellent. I shouldn't get excited, but historically good things have happened to LCFC in the same month that Selby has won the World Championships ....

We've had some rain at last. More than enough last night to dampen the ground and a few more heavy showers today. Not great for getting out and doing anything but we certainly needed it and I think it will kick-start some activity once we get a warmer spell.

Time for to check out the various 2021 lists I'm keeping.

I've done a quick end of April comparison of the 2021 SP5595ish list vs the 2013list. The basic comparison is 368sp. vs 320sp., but going a little deeper: of the 368 species listed so far, 100 were not recorded at all in 2013 and of those 23 are complete ticks for me. That's pretty good going given that I'm doing it in a very ad-hoc way around how I'm feeling physically and the weather, although on the flip-side I was working full time without hinderence in 2013 and had perhaps less time in the field. It also means that in 2013 I'd listed 52 species that I've not as yet seen in 2021, but spring has been faltering here lately.

The 100 not recorded in 2013 breakdown as: Vascular Plants x21, Coleoptera x18, Hemiptera x10, Fungi x9, Lepidoptera x8, Lichens x7, Birds x6, Diptera x6, Arachnids x4, Hymenoptera x3, Mammals x2, Collembola x2, Bryophytes x2, Psocoptera x1 and Algae x1. Given that the actual target for this year was to better my 2013 totals for plants (Vascular + Bryophytes), Coleoptera, Diptera, Hemiptera and Hymenoptera I take this as showing potential though the next three months will be key. 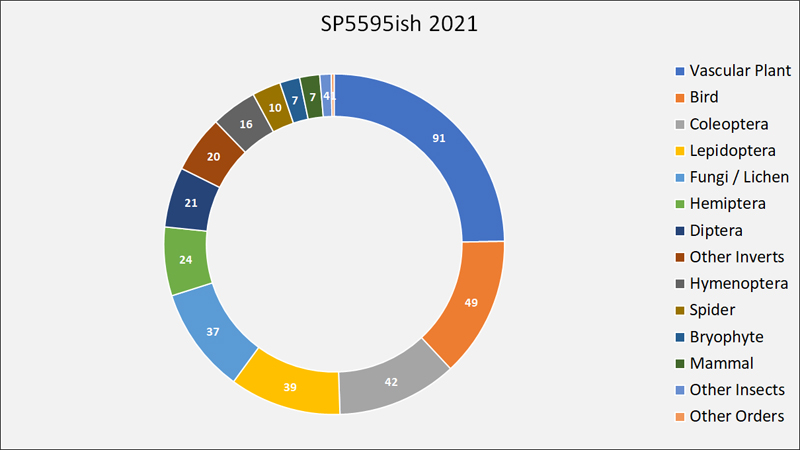 I expect numbers to rocket in May and June - assuming I can get out and make the effort and the moth trap picks up. Flowering grasses will need some effort, as will bashing hawthorn blossom and sweeping flowering umbelifers.
As for the various bird lists, a little more progress in April but not so much in the square/garden. Of the ten species added to the overall 5MR list, only two were in the garden (Blackcap and Lesser Redpoll), and two more in the square but not the garden (Whitethroat, Swallow). Ring Ouzel, Wheatear, Cetti's and Sedge Warblers and Linnet were added to the 5MR, but the patch list has not increased much. It shouldn't take too much to add a handful in May, as migrants have been a bit slow coming in. Only 28 species seen in all areas within the overall 5MR seems very low; the garden is always going to be the lowest list but there are only four more species seen in all areas except the garden (Grey Heron, Cormorant, Great Spotted Woodpecker and Stock Dove) which almost certainly says more about me not putting in much birding effort than anything else.
A reminder that the 49 species in the square list includes all species seen within the square and garden, rather than square or garden as below. 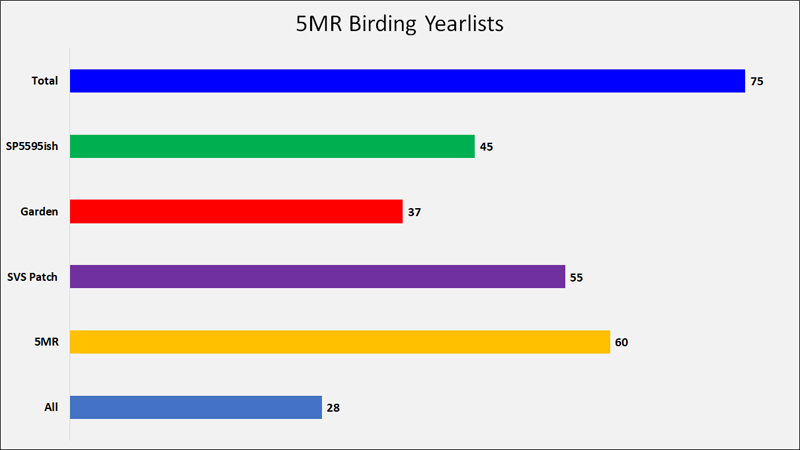