Who Do You Think You Are?

I know the programme is focussed on the famous, tracking their histories back to common earnest people or back through harrowing family trails. But we all have family histories. I'm lucky enough to have been given a massive head-start should I ever have a proper go at tracing my family, that's because back in 1999 a Mr Phillips in Enderby made a brilliant attempt at tracing his wife's family tree and spreading it out as far as possible. His wife's great-great-grandfather and my dad's great-grandfather were brothers, and he took the time to contact my grandfather and one of his sisters to pass on the information he'd found. Because of the work that he did, I have a very good trace of my paternal family line going back to before the formal registering of births and deaths started in 1837.

Before all that though, there is the matter of my surname. Skevington is a bastardisation of Skeffington (as are Skivington, Skiffington, Skefington and Sheffington). Have a look on the map at Leicester, and follow the A47 east towards Uppingham. About half way between you'll find the Leicestershire village Skeffington which is where my family name derives from. Skeffington is itself derived from anglo-saxon; the village was Sceaftinton, meaning place of the sceaft tribe (and sceaft was likely drived from sceap meaning sheep). Essentially it was a farming village notable for sheep - nothing changes!

There is a Skeffington/Skevington (etc) family shield which features three black bulls on a white background. There is a crest element which is a mermaid holding a mirror and comb when the shield is used in a formal coat of arms. The family motto is 'per angusta ad augusta'.

There are some (in)famous Skeffington's in history - quite probably nothing to do with my direct family line but worth a mention. Sir William Skeffington was MP for Leicestershire appointed Lord Deputy of Ireland under Henry VIII. Essentially he was one of along line of Lords Deputy who were tasked with keeping the Irish under English rule and to quash any rebellion. Certainly not something I'd advocate.

One of his other sons was Sir Leonard Skeffington, who was a Lieutenant of the Tower of London who was credited (!) with inventing an implement of torture - known as the Scavenger's or Skevington's Daughter. Seems it folded you up and compressed the body until blood ran from the nose and ears. Nice.

Both his grandson William and great-grandson Thomas were MPs for Leicestershire. Wonder if that is the Thomas Skeffington who had this built?

There's also a whole load of toffy tory Skeffington's in this lot - seems a bit far removed from sheep farming to me.

Happily, there is someone in my direct line who was a bit more creditable. Here is a very simplified tree showing the paternal line only, from my son's and their cousin back through nine generations. Obviously there are lots of wives and daughters (sorry), uncles, aunts, sisters, brothers etc removed for clarity. 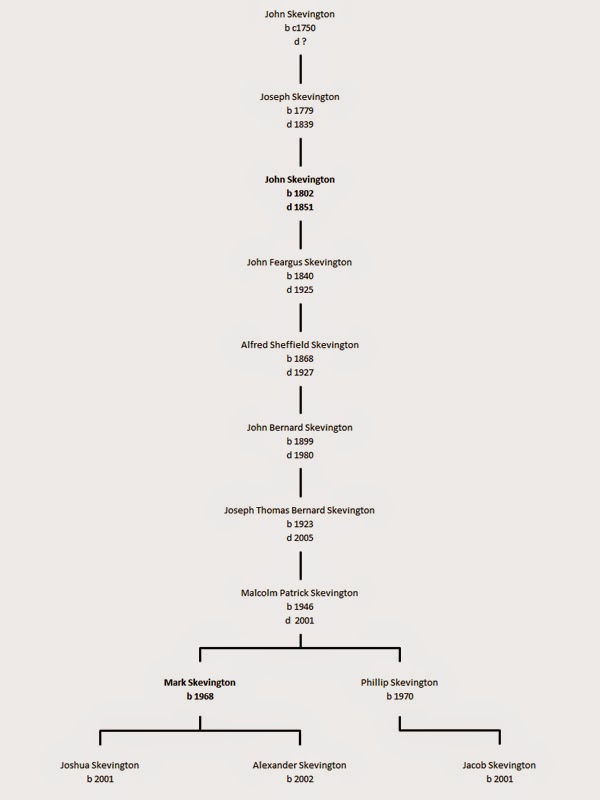 See that bloke back a few generations from me, my great-great-great-great-grandfather born in 1802, John Skevington. He was a notable figure in the Leicestershire Chartist movement, the working-class push for political reform. Seems that he tried to use his influence to keep splintering chartist factions together and to prevent violence, although he was arrested in 1842 and blamed for causing coal strikes. His arrest caused a clash between the police on the one hand and the miners and Chartists on the other. There a several on-line references suggesting that he lived 1801-1850, but the family tree search that I've been passed on gives 1802-1851. Either way he died aged 49, and he is apparently buried in Loughborough so maybe I should go and try to find his gravestone. It's quite likely that his son's middle name Feargus is a nod to a notable Chartist leader Feargus O'Connor.

There are at least 18 people in the same generation as my grandfather, of which 8 were male Skevington's - clearly a lot of scope for tracing the family in a bit more depth when I have spare couple of years!
Posted by Skev at 22:03

Fascinating stuff.
I traced my paternal line back to the same period. Before that it becomes very arduous and very expensive.
My father was the first of my line to move away from the areas each side of the Kent/Sussex border and the first to take up an occupation other than agricultural work, although that's where he started.
On my Grandfathers birth certificate in the "fathers occupation" box, it states that my Great GF was a peasant.
He signed it with a cross.
When I returned from Australia after several years, I settled in Bedfordshire and took a job with a local electrical engineering company, and I was sent to a small village in Sussex named Helingly on an install that lasted for around 3 weeks.
There was a single old pub there called the Golden Martlet where I quaffed a merry pint or three. Later, after doing the family the trace, I found that from about 1750 to the late 1800's, 3 generations of my ancestors worked on the surrounding 3 farms.
There were no other pubs in the area and it dawned on me there was little doubt that I had been propping up the bar where GGGGGGGFather was quaffing some 250 years ago.
Quite a nice thought

Great stuff - now that's a proper way to trace family, quaffing in bars where ancestors had an ale or two!