Regular readers of this blog over the years will recognise the odd reference to me nipping down the lane. This refers to Springwell Lane, which is the remaining rural back-lane into the estate. There is nothing remarkable, spectacular or exciting about this lane, other than within a couple of minutes of leaving home I am in the middle of farmland and free to swish me net, raise my bins or generally dawdle along in a world of my own with just the odd cow and the constant drone of the M1 for company ......

But everything changes - just as well I'm not doing my 1000 in 1kmsq challenge this year.

There has been a long-standing planning application to build more housing round here - it was rejected, appealed, rejected, appealed and then imposed by the government. We don't need more housing and it will create pressure on the school and roadways. But the housing element was always inevitable I suppose, and it would be churlish to moan about increased housing destroying green-belt land when actually the farmland is pretty sterile and in any case I live on what would have been the same habitat before our estate was built 22 years ago. In some ways, the plan may bring some benefits for me as it will create access near to Whetstone Brook and there will be an open area with a balancing pond and native planting.

See here for an illustration of the plan, and here for more detail about the whole thing with some maps etc.

The bit that has always bothered me though was any potential impact on Springwell Lane. Part of the planning application was to utilise Springwell Lane and some of the adjacent farmland to create access for construction traffic, but I was concerned that the lane would actually be opened up to make it another more useable traffic access into the estate. It's all going ahead now, and I wonder if my fears are being realised. 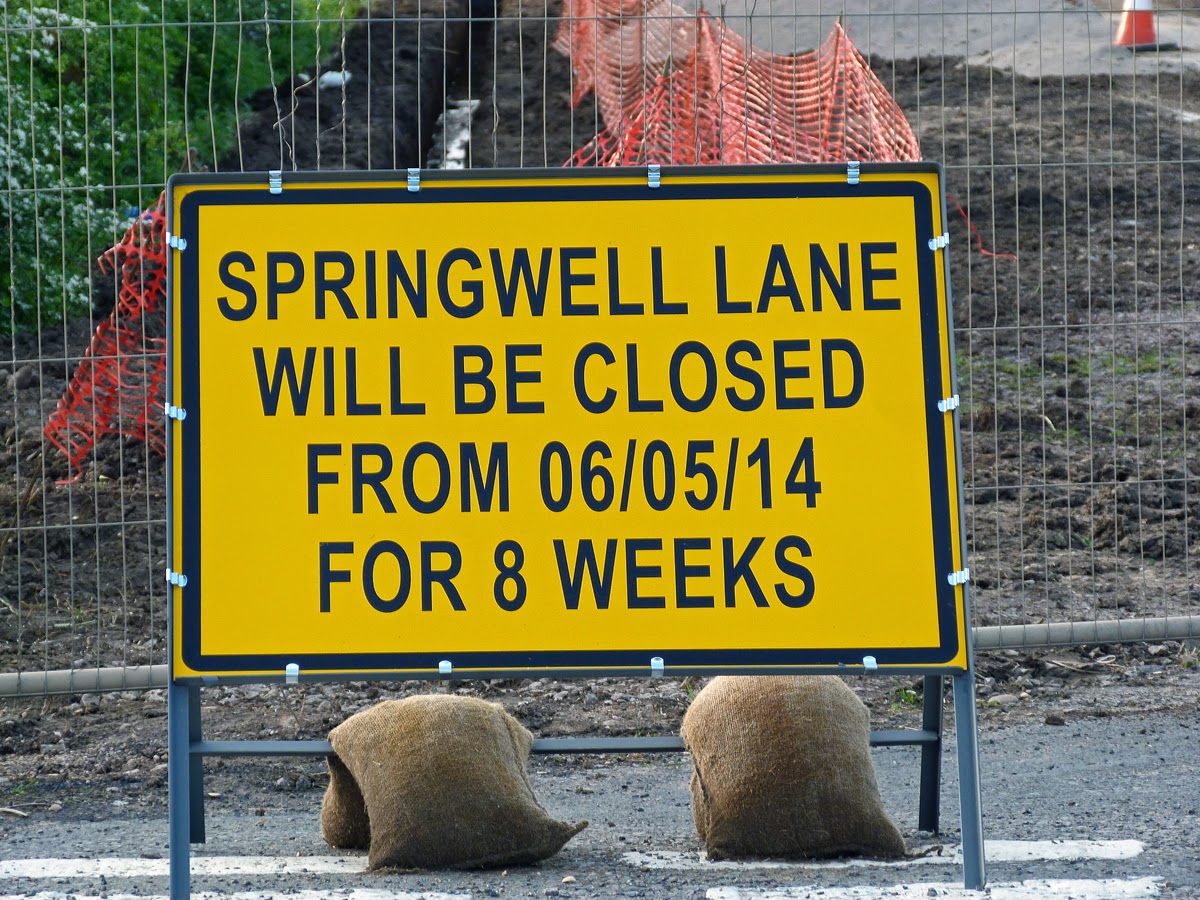 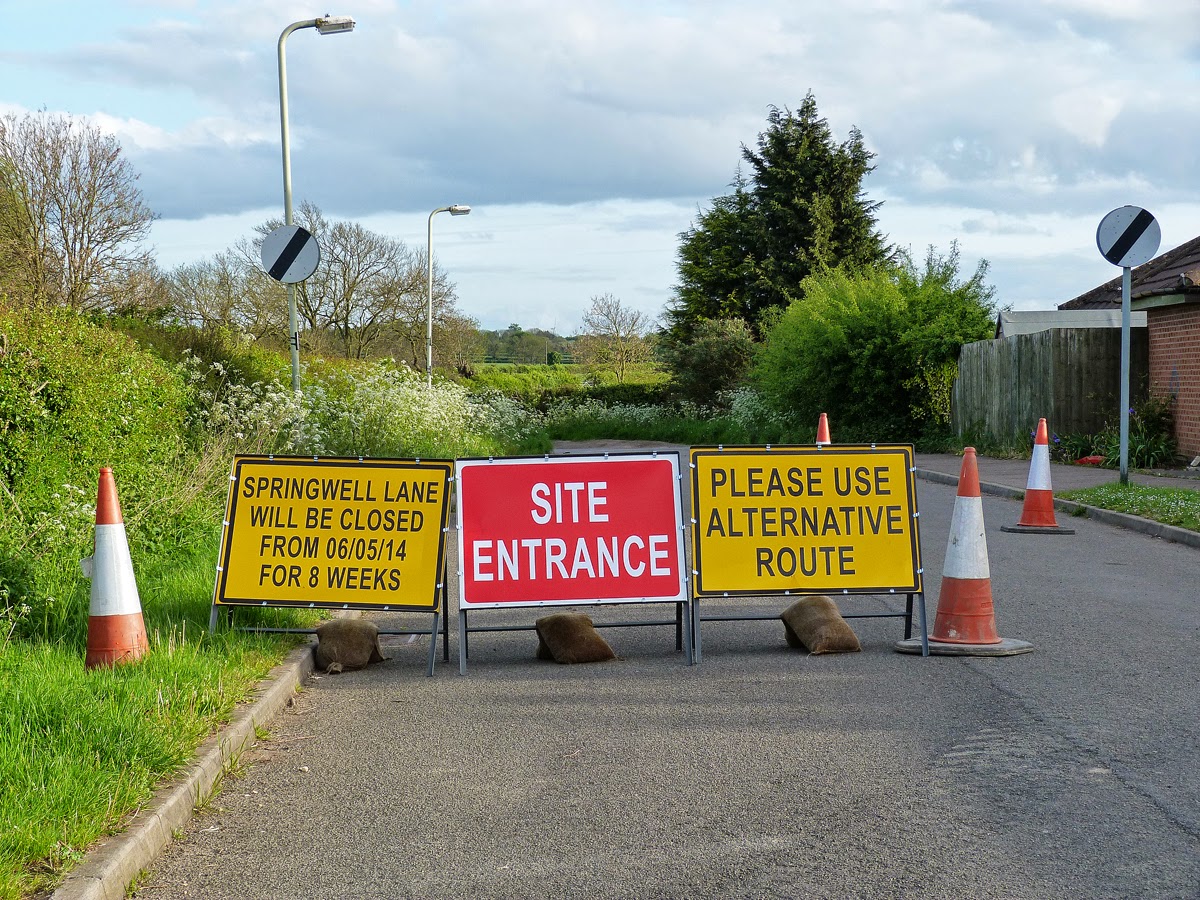 The plan was supposed to be to build a new temporary road for the construction traffic, but looks to me like the opportunity is being taken to 'improve' Springwell Lane. Instead of a crappy single carriageway pot-holed lane with wide kerbless verge, I wonder if we'll end up with a normal two-lane kerbed roadway. The southern end of the lane is completely closed off, but I can still walk down from the estate to see what's going on. I think. 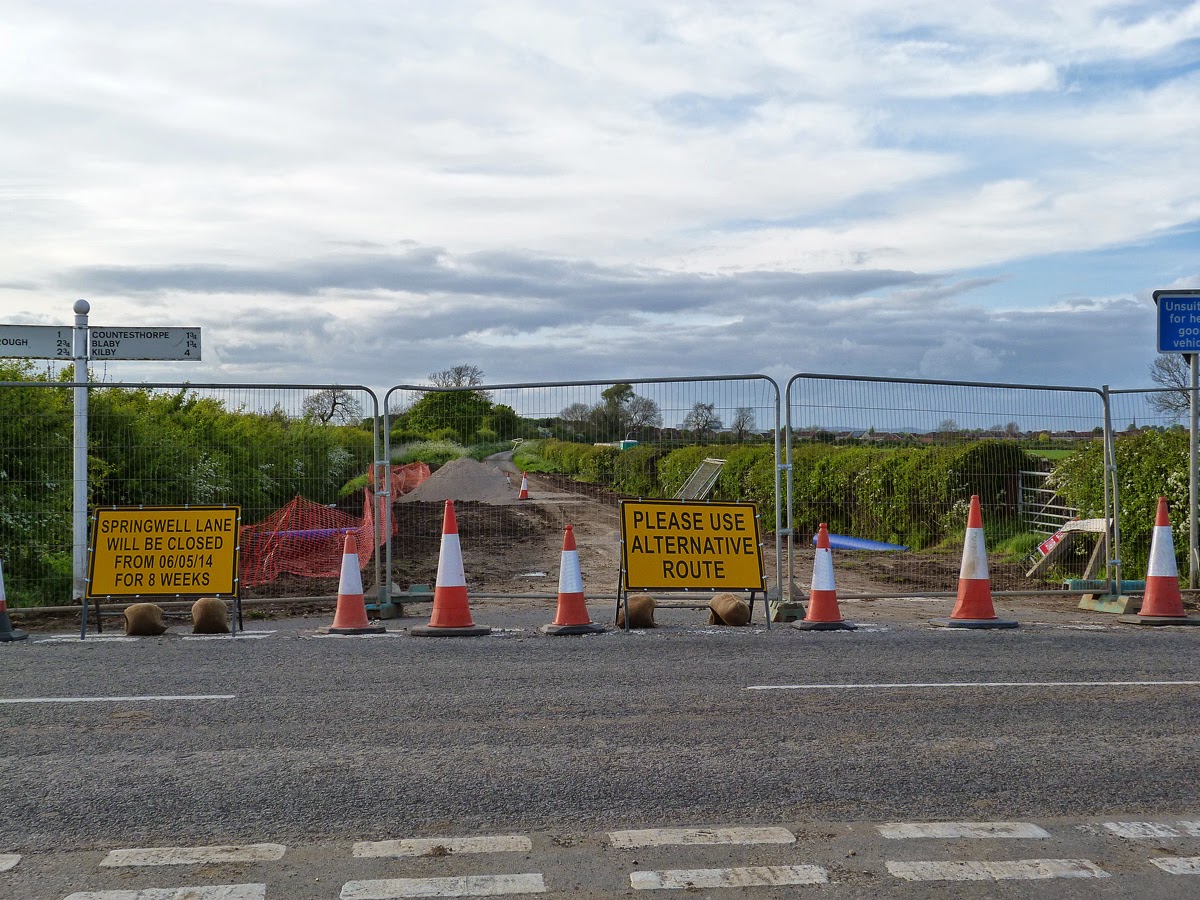 The grabbed satellite view below shows Springwell Lane heading south out of the existing estate and across Countesthorpe Road before joining the A426. 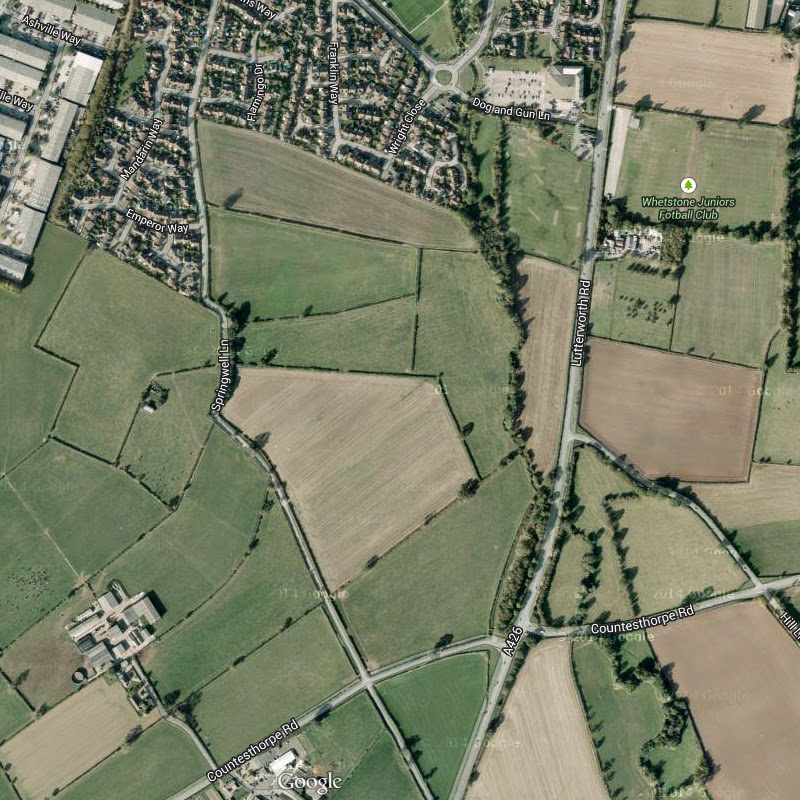 I've badly sketched an existing building area where houses are already being built (within the orange boundary), the new area that I guess will start being built on this year (within the red boundary) and what I think will be the construction traffic temporary roadway in blue. The new estate will be accessed from Wright Close with no vehicular access directly onto the built up part of Springwell Lane - or at least that was the original plan. 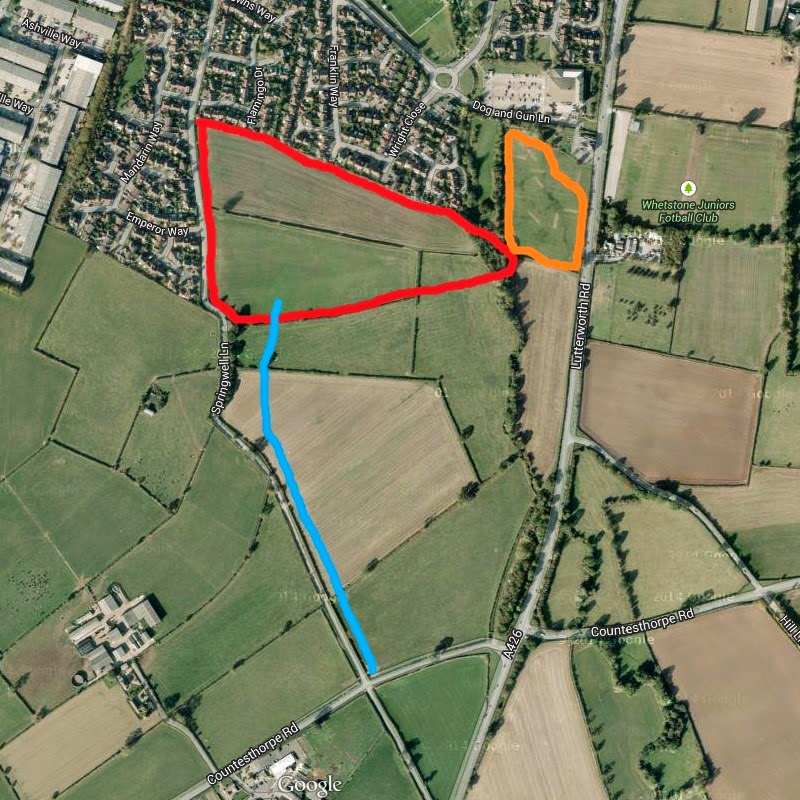 Work to prepare the way actually started a few weeks ago in early March when netting was placed over sections of parts of the hedgerows to stop birds nesting - no doubt these netted sections will be cut down to make-way for the temporary road. 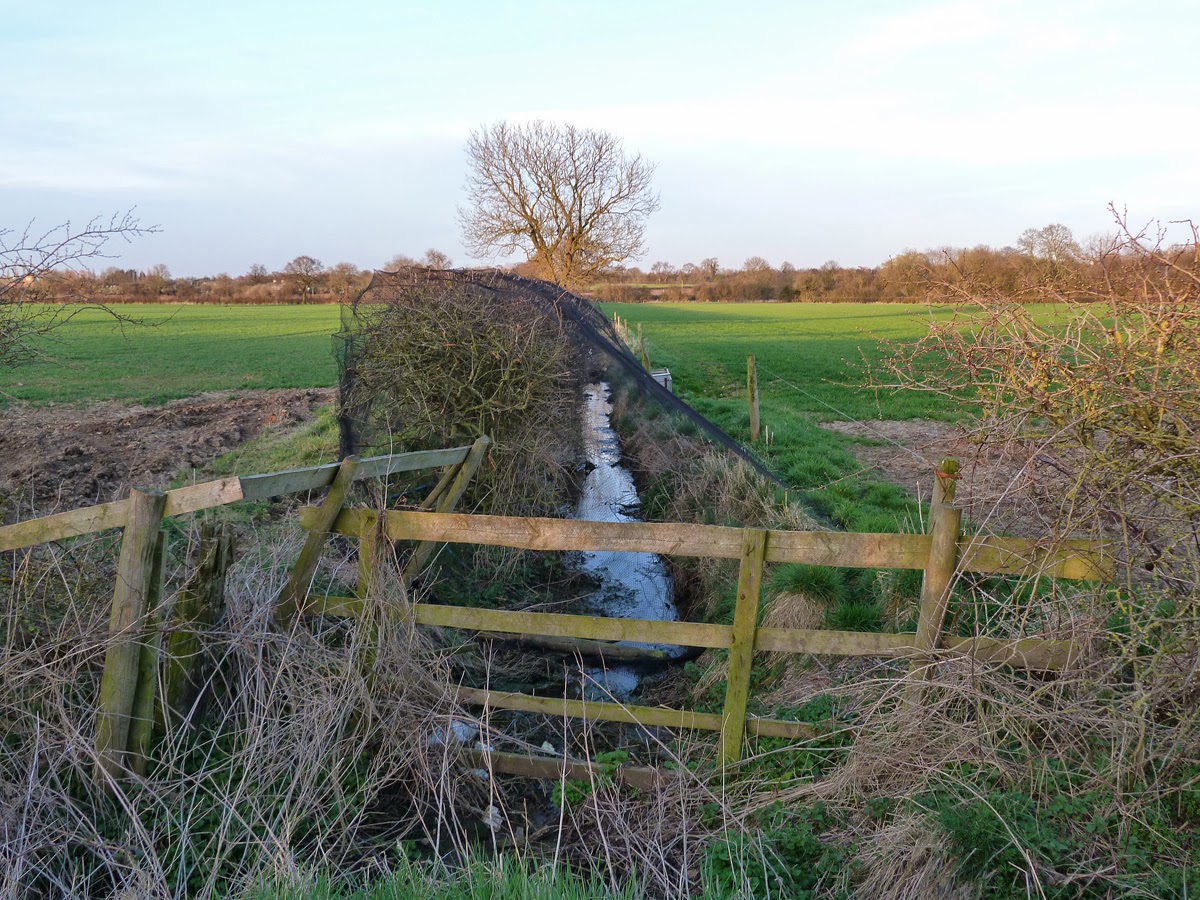 Either way a bit of disruption down the lane. Hopefully temporary and recovered after a couple of years, but potentially it won't be a lane anymore - just another busy road .....
Posted by Skev at 22:01

Labels: Down The Lane