Having posted all those pics of Croft Pastures I then didn't get around to highlighting what I'd gone there for. I had a few plant targets after seeing that Graham Calow has posted photos to NatureSpot. Mainly small and not very photogenic plants at that. A couple of the key species at this site were good to see locally, but I have seen them before on the first PSL get-together in West Sussex. 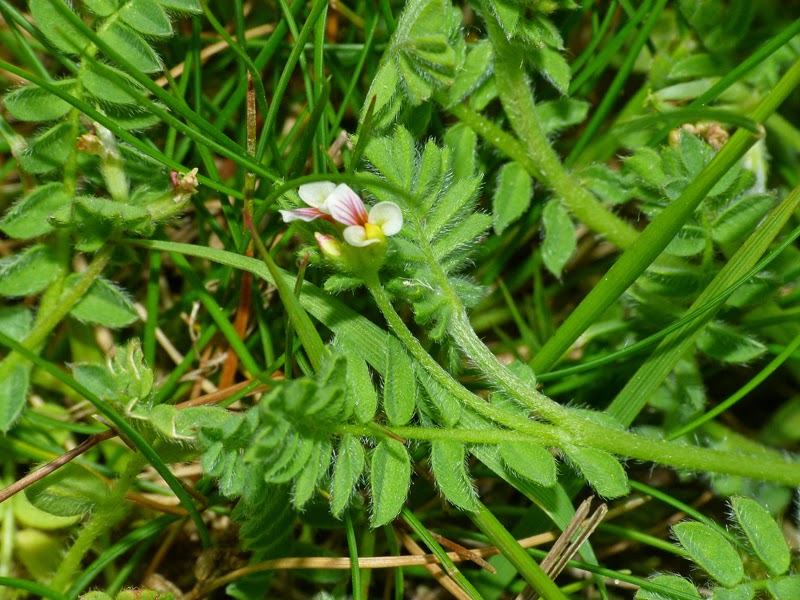 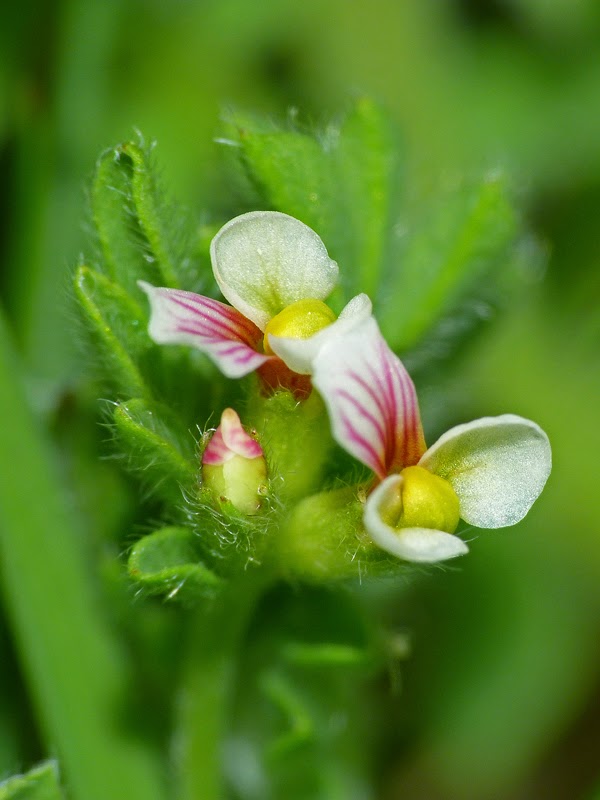 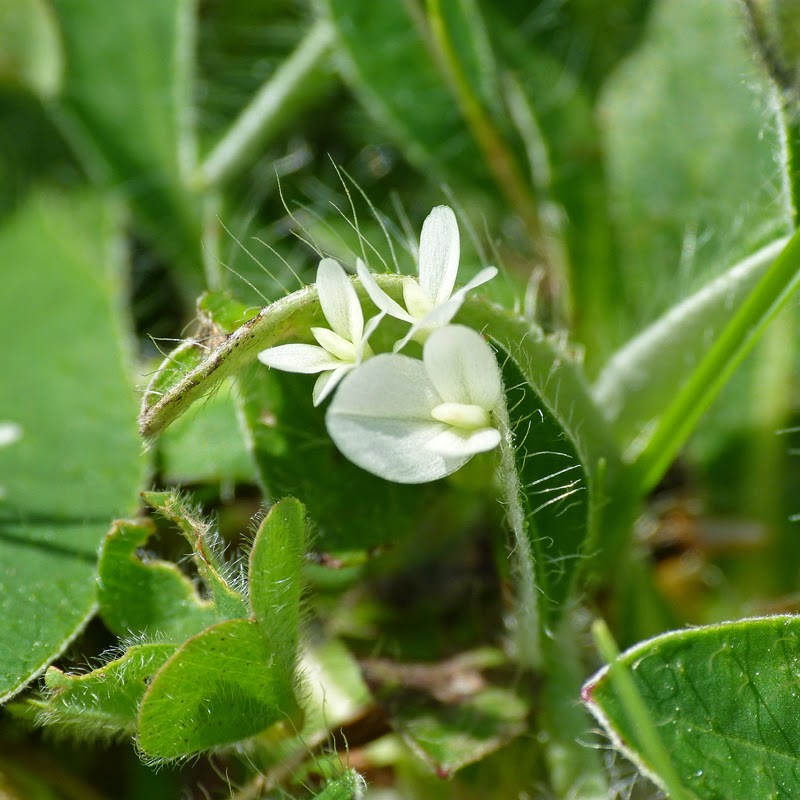 In the small area where this clover was growing, I also saw Annual Knawal, a small and not very inspiring looking thing, but was too late in the season to find any remaining Upright Chickweed (but good to know where to look). Also in this small area were a couple of interesting lichens including this: 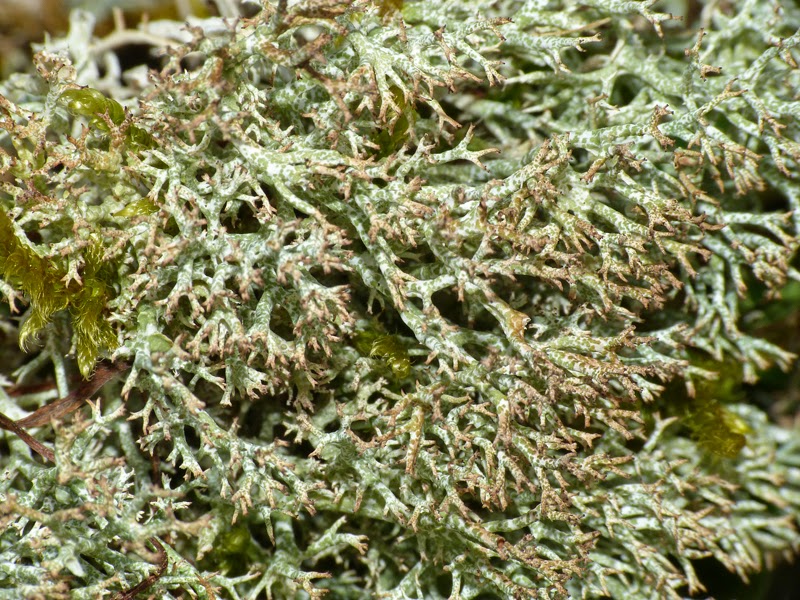 There is a steep-sided 'cliff' along one side of the reserve. One of the plants that has established and spread around the cliffs is Reflexed Stonecrop, not yet in flower but identifiable. 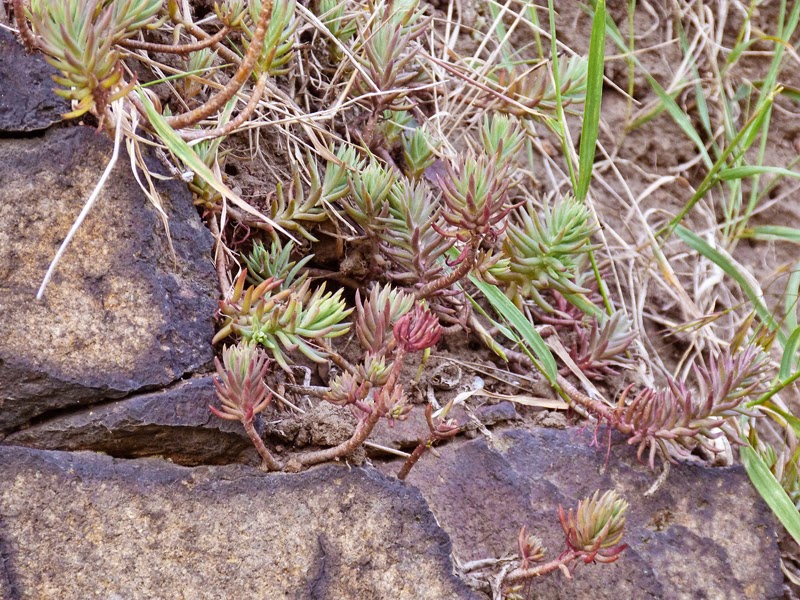 One that hasn't been identified yet is undoubtedly a garden escape, though it was growing freely and in profusion! Appears to be a spurge of some sort. 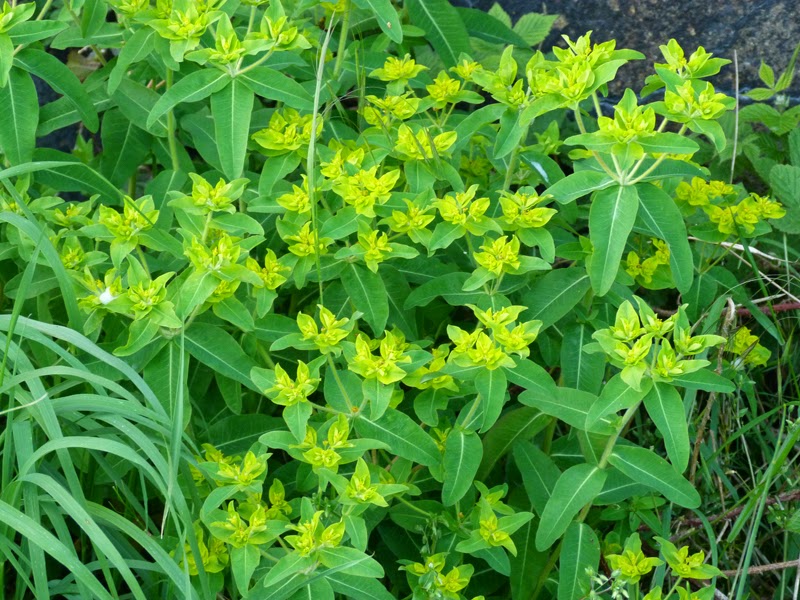 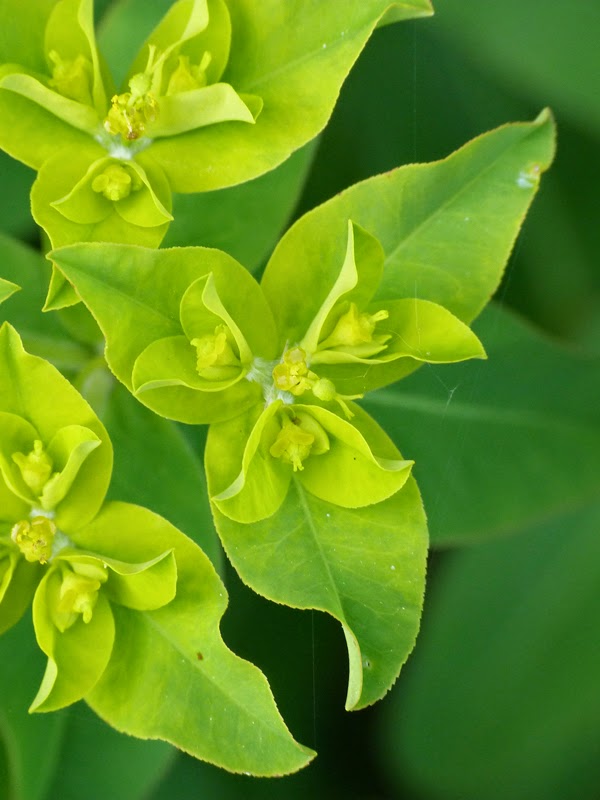 One I walked past on my first short visit, was this Common Cornsalad - easily overlooked as again it's a straggly ugly plant with tiny flowers. 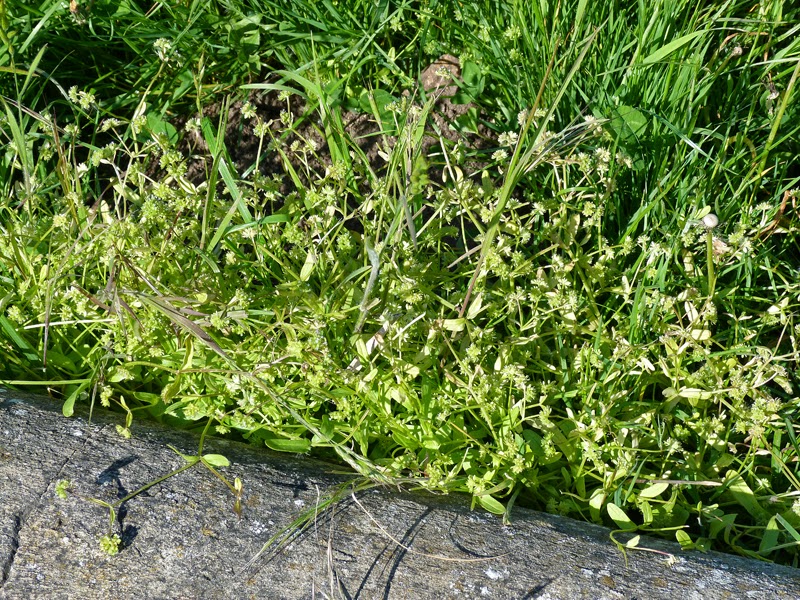 A much nicer looking and more obvious flower was the Meadow Saxifrage carpeting parts of the reserve .. 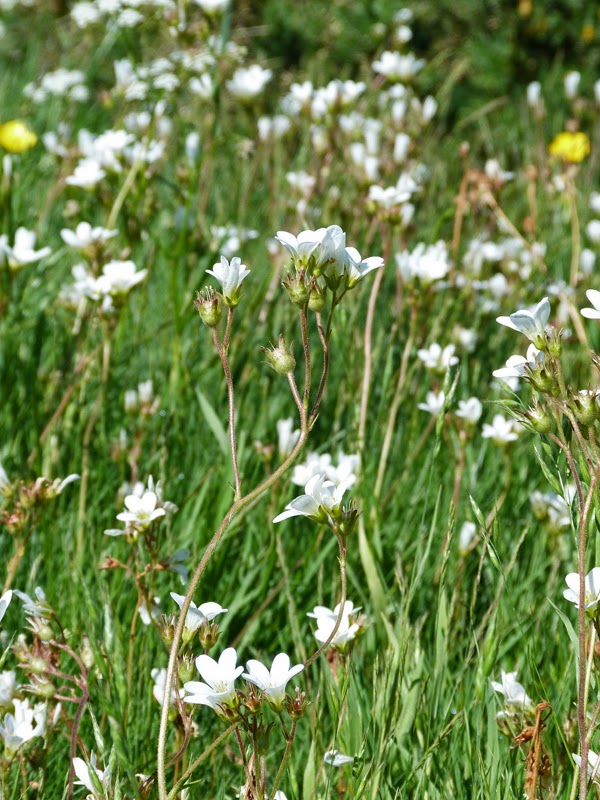 I also saw, but failed to get photos of, Wild Clary and River Water-crowfoot. Away from Croft Pastures, I also picked up another plant tick by shamelessly twitching some Dusky Crane's-bill in nearby Leire.

Plants aside, I've also picked up a few other bits around the weekend in the good weather.


One the Saturday, I spent a bit of time watching the River Soar from the roadside footbridge in Croft village. Turned out to be very productive as with a bit of patience, wearing sunglasses and switching to bins I managed to see enough detail to pick up four fish ticks. The most obvious, and pleasing, was Brown Trout - amazing really given how narrow and relatively shallow the Soar is at this point. Managed to get a very pants photo of the largest of the three seen .. 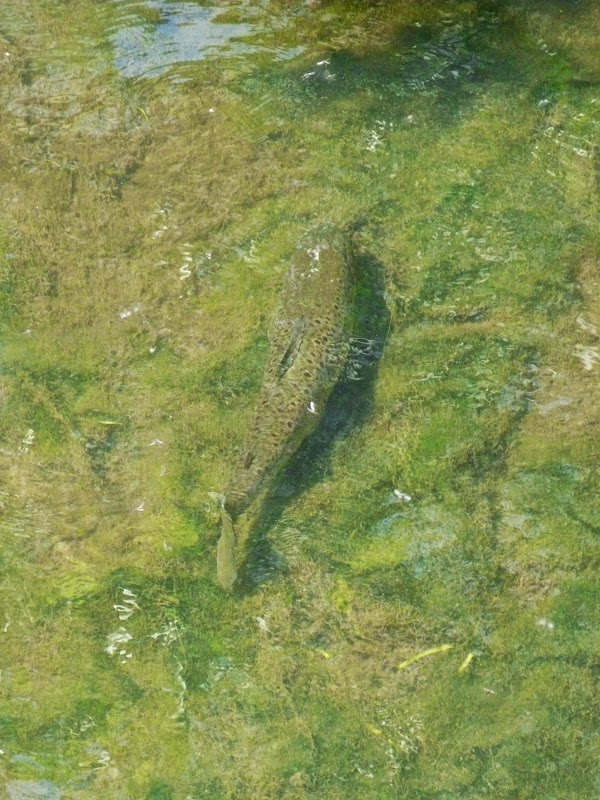 I also saw Perch, Roach and a good few bottom-feeding Gudgeon. Good to add a few more vertebrates to the PSL list. As it happens, I managed to add a couple more vertebrate ticks last night. I nipped over to Saddington Reservoir with the bat detector on a mission that turned out to be highly successful. Before it was too dusky I was already watching what I thought were Noctule Bats hunting, though at that point they were out of range of the detector across the other side of the reservoir. As it grew more dusky, I started seeing and detecting bats hunting low and directly over the water - Daubenton's Bat. Calls peaking at c47khz (all a bit subjective within a couple of khz I reckon). I'm sure the following gives the full sense of the occasion! 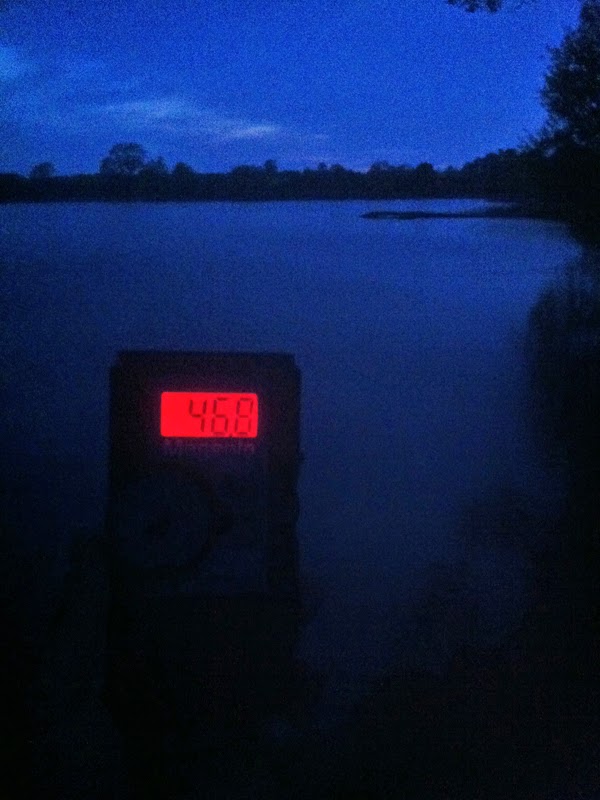 Whilst walking back to where I'd parked near the dam, I picked up a very distinctive signature peaking at c24khz - a very synthetic slow paced 'chip-chopping' - Noctule Bat. Well pleased with that. The sound is reminiscent of late 70s Human League - there is a sound-clip here.

So having added seven new plants, two lichen and and no less than six vertebrates to my list, it would be surprising if there were no new inverts included. There were, though only four.

Best were these two beetles .... 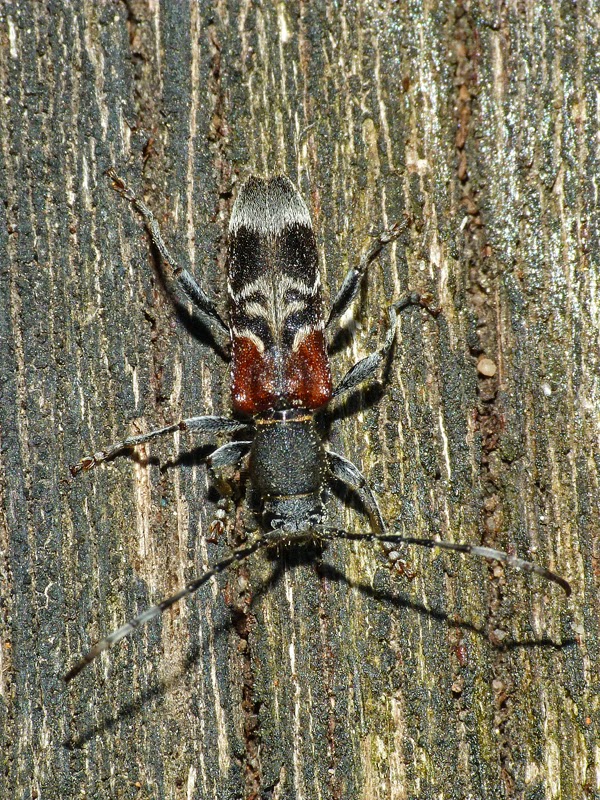 Anaglyptus mysticus - this one swept from hawthorn near to home on Friday evening .. 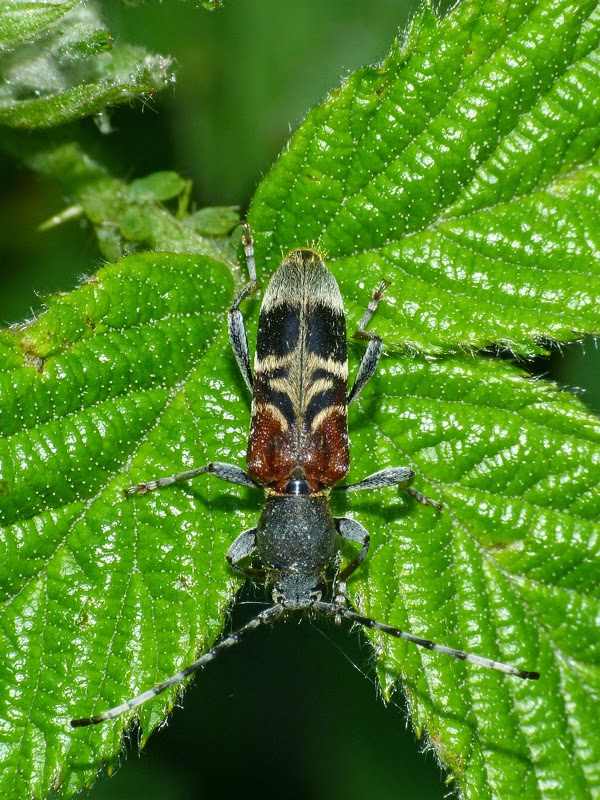 .. and then like buses I found this one openly sitting on bramble at Croft Pastures on Saturday 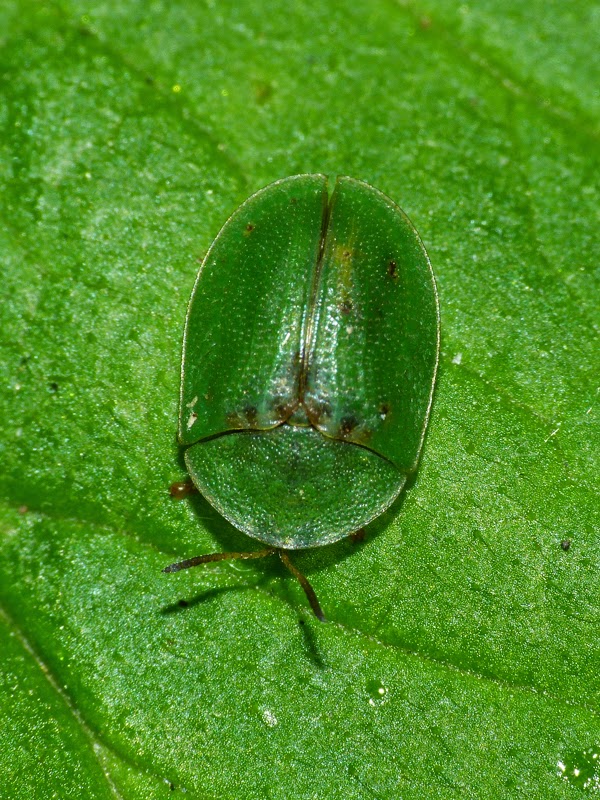 Otherwise another beetle (Elodes minuta) which won't sit for a photo at all, and a bee that threw a seven in the pot before I could photograph it (Nomada ruficornis).
Posted by Skev at 22:26