Prior to this year there were only c15 records of Lap Buntings in VC55, and a fair few of those are single observer flight-call / vis-mig records. So far in this invasion year, we have had another flight-call vis-mig record and, thankfully, one or two loitering around Sence Valley Forest Park over the last couple of days with a large mixed flock in various fields.

Having failed to devise a cunning plan yesterday, this morning I headed straight over to SVFP at first light. It was dull with very light occasional spits and spots, and I was on my own. I headed to the general area where the birds were reported to be, and immediately found a large crop field with (something like) sugar beet and a large flock of Linnets, Mipits and Skylarks busily feeding - flying - feeding - flying .. etc

I spent the next hour dilligently scanning through the flock and listening to every flight call. I grilled more Linnets, Mipits and Skylarks than I care to mention, as on every scan one or the other would suddenly pop up from behind a leaf or lump of soil and stop the scan for a second. Nothing. I was getting a bit peeved when suddenly whilst scanning I picked up a couple of previously unseen Reed Buntings and even more obviously a handful of Goldfinches. Buoyed by this change in the scenery I carried on and spent another Laplandless half hour before I really had to leave and show my face at work. Arse.

I decided to hold back on relaying 'negative news' as, to be honest, the area was fecking huge and it was highly likely that one or more Lap Bunts were still knocking about. I also didn't want to deter others searching and hopefully confirming the continued presence. Sure enough, whilst at work the message came through that at least one was still present late morning.

So, an early departure in the afternoon and I was back. Once again, I headed down to the huge area and searched, alone, for the elusive bunting. This time, rather than scanning from the track I entered the field margins along footpaths to increase the observable area. The big field I'd watched earlier still had a few Skylarks but was quieter than this morning. I carried onto to the next field, passing the stream and heading along a path to a pool/scrape within the fields. Still very quiet - no big groups flying about and nothing calling apart from 3 Grey Wags along the stream.

I headed back up the track and along another path into the western edge of the first large field. A few Skylarks popped up, so I stopped to scan. It went quiet again, so I carried on. Suddenly, without warning as nothing flitting about or calling, a mass of Linnets, Mipits and more Skylarks rose in a swirling mass from the back of the field c40M ahead of me. I watched them and listened hard. I could clearly hear Linnets, Mipits and Skylarks .... and feck-all else.

The flock descended into the field just behind me, across the stream and with lots of birds viewable within c30M. I started scanning with the scope and it was the same story - Mipit, Mipit, Skylark, Mipit, Linnet, Mipit, Linnet, Linnet .... LAPLAND BUNTING!! I wanted to shout a few celebratory expletives but managed to restrain myself and watch the bastard bunting for a few minutes as it continually crept along amongst the crop. Even whilst watching intently, it would briefly disappear. This is one bugger of a bird to find when searching alone.

Still, well worth the effort and hopefully there will be more - preferably in a more easy to search location with photographic opportunities! 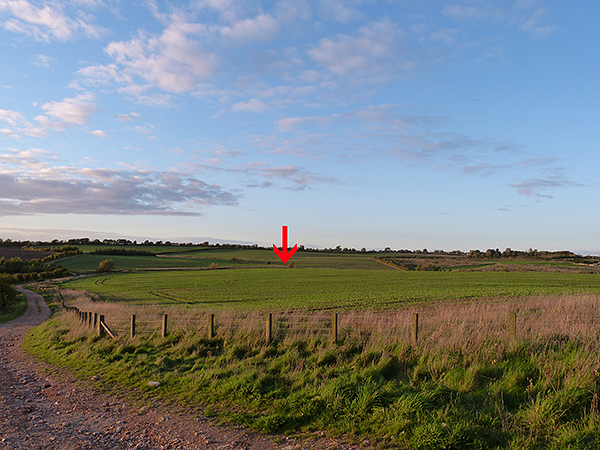 The search area - all those green fields have the same stuff in them and the flock is getting into all of them. The glorious moment occured in the middle where the red arrow is. The red arrow is not actually there unfortunately, as that would have made it a whole lot easier. 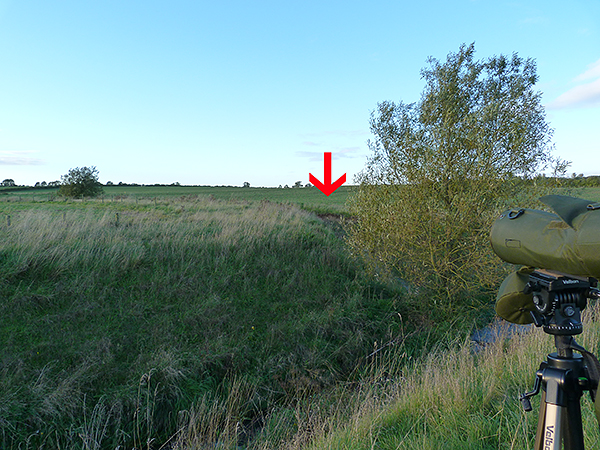 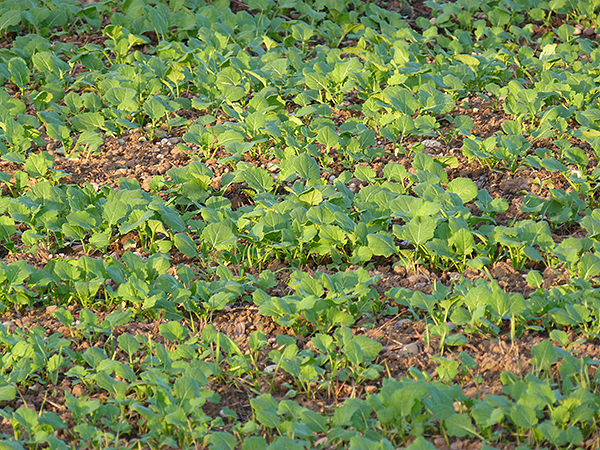 I had a feeling some Laps would turn up whilst I was away, but I'm sure there will be more before the end of the winter.

Fuck. Crop Gurning - where will it end ... Rape makes much more sense. Whatever it is, I got sick to death of seeing it!

Sugar Beet. Too many birders going to Norfolk methinks. It would be a tick for me.

I twitched Blyths Pipit in Nottingham in similar habitat to that one winter. Keep a look out. There might be other stuff in there...