What a contrast - after the snow and associated collapse of English transport infrastructure, a couple of mild days and it's spring already. Nearly. I had an Agonopterix heracliana to a lit window on Sunday night, and with evening temperatures starting at a blistering 8degC or so I decided to run the 80W actinic trap in the garden - nothing ventured nothing gained. On Monday night I blanked, but undeterred I put the trap out again last night and was pleased to find this morning a couple of moths - albeit both the same species. Dotted Border is not a regular species in my garden, though this is predominantly due to me not bothering to trap in their main flight period. They were both fairly fresh males (the females are wingless). 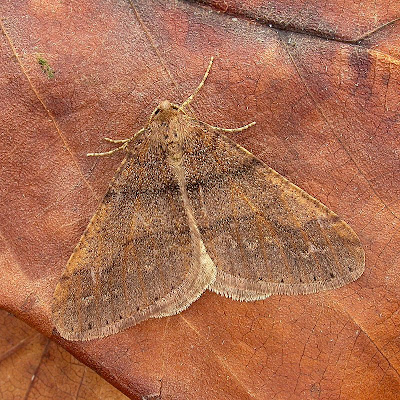 Dotted Border
Posted by Skev at 19:23

Why do actinic traps seem to do best early in the year?

Not sure they do perform any better to be honest. I just use the actinic first in the year as I don't have to bother with a choke and the bulbs are more likely to survive a cold shower.