This week, I have mostly been listening to .. 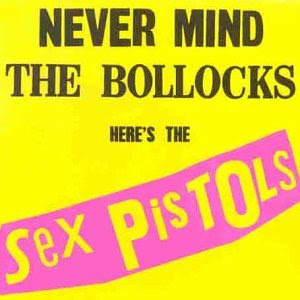 Given that I was only 9 when it was released, it was some time afterwards that I heard it through (though I had been aware of the nonsense surrounding the band from the news and had heard the singles). It is surely the most directly relevant album title ever, and the only way to listen to it is to put the hype and bollocks (and Bill Grundy incident) aside and pretend you have no idea who they were. Just accept it for what it is - a superb aural assault. Best played with the volume at ear-bleeding levels. My favourite track is this (with the classic lyric at 1:58):
Posted by Skev at 23:19

Labels: Listening to, The Sex Pistols

My all-time No1 album. Nothing has come close before or since.

To any wanker who says the Pistols can't play... you've never even listened to the album you fuckers!

Even after listening to this album!!, I still strongly think that the rumour Chris Spedding played guitar on this album is very likely to be true. By his own admission Sid couldn't play and Matlock had fallen out with McLaren before these recordings started so who it is playing bass is anyones guess. Cook was a proficient drummer and it's Rotten/Lydon on vocals....while I don't dispute it's a sensational album I do have doubts that it was the Sex Pistols we saw in the photos that actually played all the instruments on it

the Steve Jones thing is an urban myth - he played the guitars on the album and he also put down a lot of the bass tracks too. He's a rather good player.

Bill Price who engineered the album reckoned Jones was the tightest guitar player he'd ever worked with, and he's engineered a few decent bands There's a fantastic documentary about the recording of the album in the studio, with Price showing the individual guitar tracks etc, on you tube (in parts):

Mind you, London Calling's my favourite still (another one engineered by Price)!

Tim, Ian - agree with you both in parts.

I'm damned sure that Jones and Cook could play and were certainly playing for the recordings, and positive that Sid couldn't/wasn't. Whether Matlock was involved at all has been promoted and refuted at various times by all involved.

Either way, the album is superb regardless of who is playing. Wouldn't go so far as to call it my all time favourite though - to be honest not sure I could whittle down all my diverse music interests to one favourite album.

Cheers for the link - will have a look later.

Crackin album - must did out my copy - never got to see em the good city fathers of Norwich had them banned when I was at uni there...philistines..

Thanks for the memories and concur with your mate re London Calling...stonkin tunes!
Cheers

Lydon's still got it. PiL were superb in Birmingham on Tuesday night.