Nipped over to Cossington Meadows around lunch time, with the intention of trying to get a couple of snaps of the Stonechats. I only had about half an hour so it was always going to be a quick grab or complete failure. Immediately as I headed down the main track, a male Kestrel was hovering over the verge and suddenly dropped down before re-emerging a few seconds later complete with small mammal in talons (presumably a vole). Further down the track, after a cursory glance over Swan Meadow (cows, ponies, herons, no owls) I bumped into a very pleasing mixed selection in the hedgerow. In the same hawthorn was a male and two female Reed Buntings, male Bullfinch, five Goldfinches, four Greenfinches, two Redwings, Blackbird, Dunnock, Robin and - the pair of Stonechats. Every time I edged closer the Stonechats fecked off further up the hedgerow. I need a much bigger lens! Eventually got a couple of grab shots of the female perched on a twiggy stem on the edge of the verge. 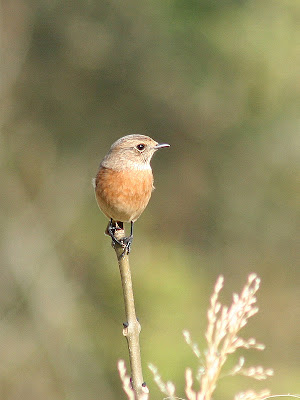 This perch is uncomfortable. 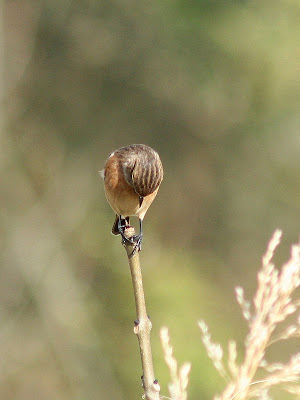 Shit - look at the spassy angle my feet are at! Before I left, some amazing Kestrel action. One male was happily minding its own business hovering over Swan Meadow when it noticed another male zooming in from The Moor at low level. It stopped scanning for voles and made an immediate bee-line for the incoming rival. They both crashed down into the long grass with talons pretty much locked before they both decided it wasn't worth it headed off in different directions. With the owls still present, and more Kestrels in one area than I've seen for a while, it must have been a bloody good vole year. Even the herons seem to be targeting them.
Posted by Skev at 22:57

There have been 8 Kestrels and 3 Buzzard at once over Swan Meadow (Matt Merritt). I just hope a Hen Harrier will join the fun!

Still haven't caught up with the Stonechats yet! Mark did you see them on the Moor?

Dave - on Friday afternoon and Monday lunchtime they were either close to, or in, the main hedgerow running along the main track between The Moor and Swan Meadow. Didn't see them today though.

John - another Hen Harrier would be nice, though I was more than happy with the last one ;-)