Emptying the moth traps in the mornings will be all the more enjoyable for a few weeks; in one of the adjacent gardens there is a big bush which has attracted Long-tailed Tits to build their fantastically elaborate nest. They've been at it for a week or so now, and are probably about ready to lay and incubate their only clutch. 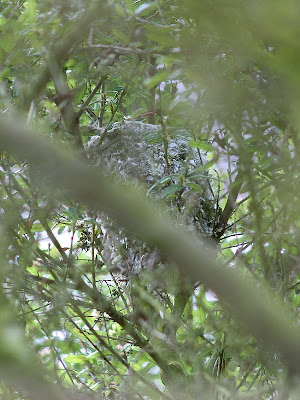 You can just about make out the nest. Just a big oval cup at this stage, it now has the top half complete aswell. We've also had Starlings detroying the mesh in the vents in the underhang below the roof tiles on both ours and our neighbours house for the first time. They've made an access just above our bathroom but I haven't seen any activity, unlike our neighbours who have a pair on the front and at the rear. This is the same neighbour who has the now resident continuously brooding Collared Doves. 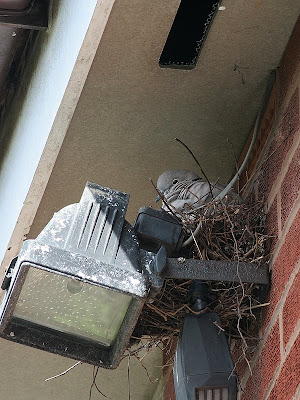 Resident egg laying machine, you can also see where Starlings have destroyed the vent mesh. Robins, Sparrows, Blackbirds and Woodpigeons have all been collecting nesting material from in and around the garden in the last week aswell, and there was some fervent cloaca pecking going on with the local Dunnocks! 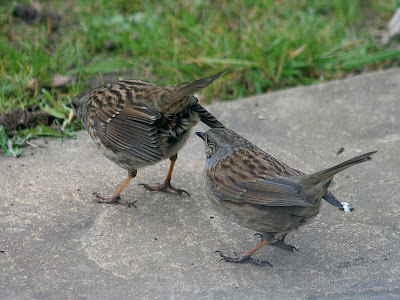 Imagine how interesting clubbing would be if prospective partners showed you theirs like this first!
Posted by Skev at 11:35

If people behaved like Dunnocks though, you'd also have to peck your rivals' semen out of your prospective partner's cloaca, which doesn't really appeal!

Quite! Is that why they say that adultery leaves a nasty taste in the mouth?