Anyone who thinks poker is a game of luck and chance is wrong. Sure, there is an element of luck and chance but they are far outweighed by the need for patience and timing, calculating the right time to pounce, disrupting opponents by mixing up the play strategies, being bullish and aggressive when needed and having the courage to fold a pair of aces. Apparently.

I went through a phase of playing a lot of on-line poker a couple of years ago, mainly play chips but also a few small-cash sit-n-go tournaments. I've also played a couple of times against real live people but nothing serious and never in a casino or properly oprganised tournament. When John Hague texted an invite to a poker night at his house last night, I couldn't resist.

There were five players (John's mates Steve and Johnny, John's brother-in-law Matt, John and me) and we all bought in with £20, divided the chips and played in a sit-n-go format with blinds increasing every half hour (or so). I'm not one to brag or crow, normally, but I had a big smile on my face after four and a half hours of play and £80 winnings plus my buy-in stashed in my pocket. MWAAHAHAHAHAHA.

It was a great night and generally a good laugh, although the three that were out of chips first had to sit through a no-doubt tedious hour and a half of heads-up play between me and John's mate Steve. By that time the blinds had escalated (in chip equivalent) from 20p/40p to £16/£32. Early on in the game though I was running low on chips and looked favourite to be first out until a great hand with 4Qs beating John's full house Qs/8s - I could have been ruthless on that one! I also won a load of chips with an undetected flush, and beating Steve's 9-high straight with a Jack-high straight. Too many other full houses, trips and two-pairs to remember. Thanks to John for hosting the game and supplies of munchies and great background music. WSOP next then .....

When I played online, my favourite site for playchips and basically having a laugh and banter with people world-wide was Full Tilt. Here are some great winning hands from open play games. 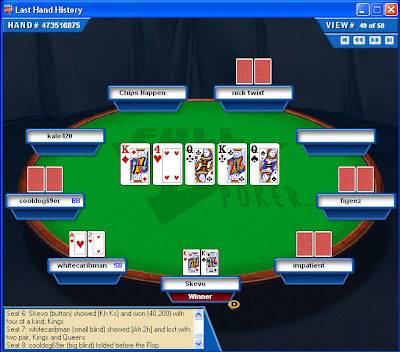 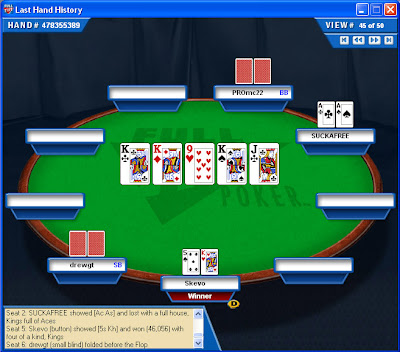 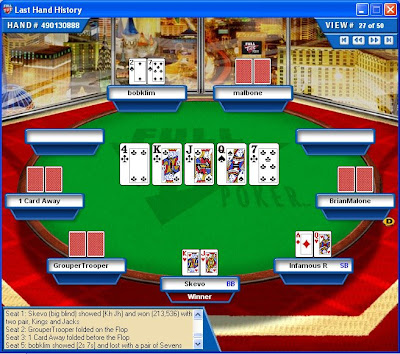 big betting pre-flop bumped up the pot, betting after the flop was restrained with everyone concerned about a flush (except bobklim who played like a muppet)
Posted by Skev at 13:46

The return of the Cincinnati Kid eh?

Next time, next time. I'm not bloody well inviting you again. My gaff, my rules.
Seriously well played. Steve Bell is a pretty goos card player himself and the only one who plays anything like regularly at some seedy club in Nottingham.