"My name is Mark Skevington, and I am a twitcher." Like anyone trying to come clean following an addiction, there will be times when the resolve weakens and you relapse. Between 1993 - 2002 I was a twitcher, albeit to varying levels at different times of the year or depending on how seriously I was taking committments to family or work. My heart really wasn't in it during 2002 though, and I pretty much packed up birding altogether for a few years until starting this blog late in 2007 and getting back in touch with a few mates woke me up a bit.

Since 2002, excluding armchair ticks, I had added the sum total of seven species to my British list until yesterday when I headed down to Portland with John Hague in tow to twitch Brünnich's Guillemot. The species I'd added since 2002 were mainly ones that I felt compelled to see due to it being a species that was high on my 'wants' list when I was more active. Here they are, and for a bit of reference I've listed all the species I twitched/ticked since Jan 2000 (again excluding armchair ticks):


There's been loads of accessible species that I could have gone for, but generally I just can't be arsed and honestly haven't lost any sleep over them. But 2013 has produced a steady stream of ridiculously rare megas and you can only ignore so many before the bug starts to bite back. Brünnich's Guillemot ticks various boxes: exceptionally rare, difficult to twitch, evocative (boxes it doesn't tick are spanking to look at, colourful and passerine, but you can't have it all). So when one is poncing around a very accessible marina like a plastic floater, it was too good an opportunity to miss.

We arrived on-site very shortly after first light (having stopped for a bite in Weymouth on the way) and there was already a crowd gathered but no collective sense of purpose which clearly indicated that the blasted thing wasn't quite as nailed on as we'd hoped. After a good while of scanning and searching the sheltered marina, we broadened our search to the more open bay (four Great Northern Divers, several RB Mergs and a Black Guillemot duly picked up whilst searching). I briefly picked up a guillemot just as it dived and I was trying to convince myself that it was the target, but with such a brief glimpse I needed to see it more fully before shouting up. Then nothing. I spent a good 15 minutes searching the same general area without seeing anything guillemot-like at all. Then a shout went up and the masses breathed in collective relief - the Brünnich's Guillemot was a bit closer in-shore from where I'd earlier seen what I'm now sure was it. It soon became clear just how active and unpredictable it was - every dive took it a good distance and it would pop up pretty much anywhere in a large radius every time. Once we'd got some scope views, we made our way over to get closer to the bird and try for some shots, although it had chosen the darkest unlit corner of the harbour for its morning feeding. There are loads of great shots on the web, here are some that are not. 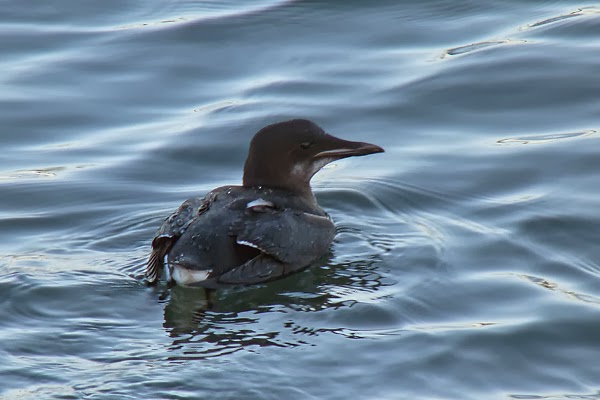 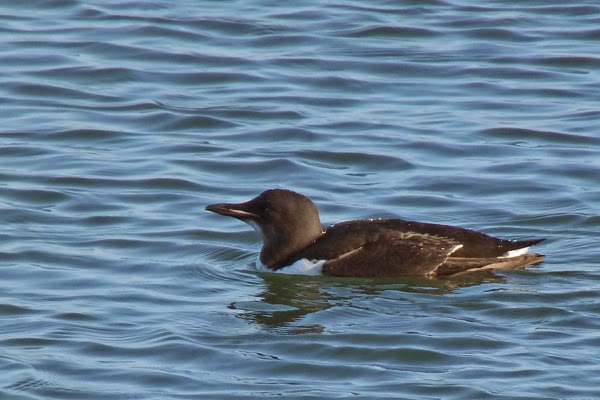 It had a very odd diving action, almost appearing to struggle to get under the water. But after every dive it would come up and stay on the surface for just a few seconds before going down again, I therefore got lots of shots showing the clean white flanks. 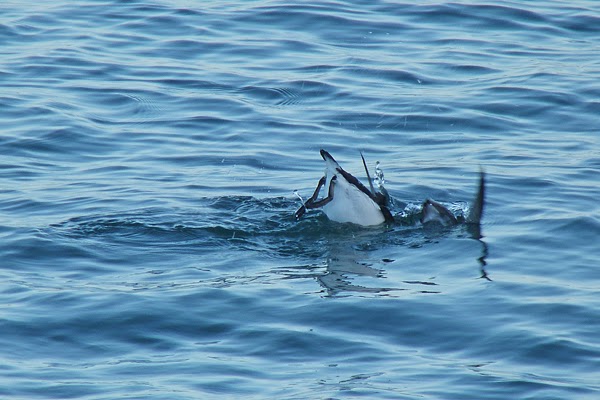 After we'd watched it for a while, we headed off for a brief Glossy Ibis interlude and some Med Gulls at Radipole. The resident plastic floater at Radipole didn't appear, but the Ibis was another ridiculously tame bird feeding in a small kids park near to the swings. 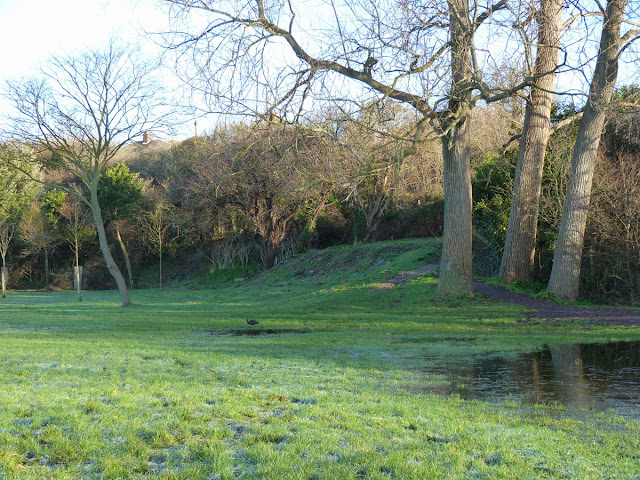 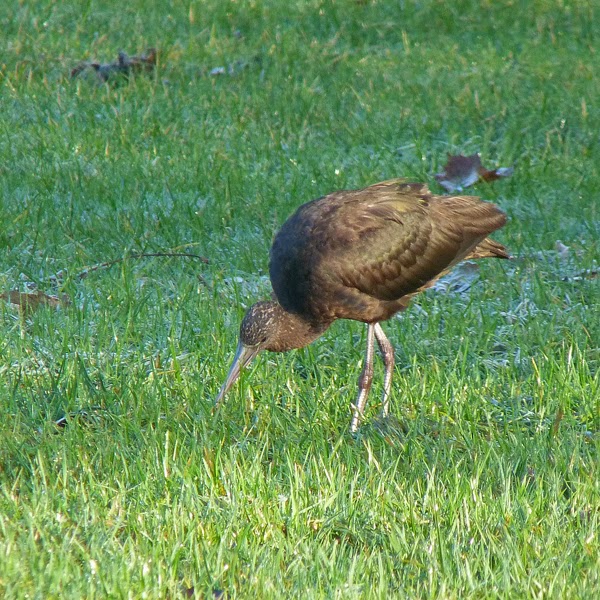 We were constrained for time as John needed to be home in the afternoon, but we headed back to the harbour to see if the BFG was more ameniable just as it decided to head into the sheltered, shallow and well lit marina. And I don't mean on the far side of the pontoon in this shot. 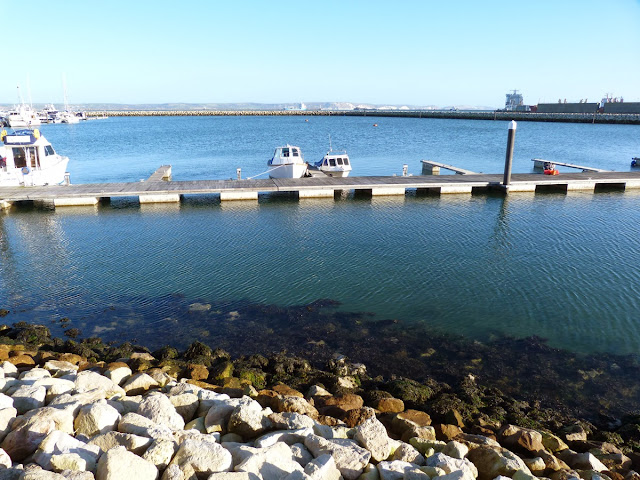 We got absolutely stonking views, though it was still restless and spent more time under the water than on it. Great photo opportunities for those with proper DSLR rigs, didn't really add anything for me with my bridge and shutter lag! I did manage a very short vid clip though. 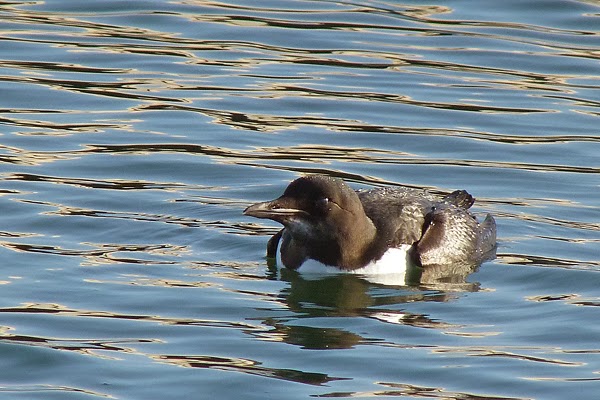 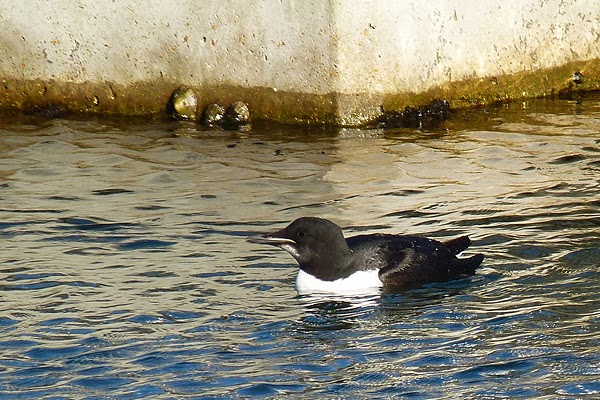 A brilliant bird that I never thought would grace my pathetic British list, and well worth the relapse. Whether I head back into twitching rehab or gradually slide back into full scale addiction is uncertain ...........

This Great Spotted Woodpecker has been appearing daily over the last week, always going for the fat balls.